Master artisan Kazuhiro Fukuda worked at Tsuge well before the Ikebana line was established and was one of the carvers Tsuge sent to Denmark to learn from innovative carvers such as the legendary Sixten Ivarsson. After returning from Denmark, the Ikebana workshop was established to showcase artisan-made Tsuge pipes that reflected what Fukuda had learned about engineering and artistry. Ikebana pipes are Tsuge's most prestigious pieces and today they are fashioned by Fukuda, who manages the workshop, along with Asami Kikuchi and Yoshirou Ohi. Each pipe is handmade by one of three carvers who use their own individual stamp but remains united under the Tsuge Ikebana name, meaning "living flowers" in Japanese.

Presented here is a particularly bulbous Acorn rendition by Fukuda and is a shape that he's demonstrated his immense talent with on multiple occasions. It's also rendered on a slightly smaller scale than what we typically see from the master artisan but is just as impressive. The tall, robust bowl wears its waistline high, tapering beautifully toward the heel spur along the base. The low-set transition further emphasizes the bowl's visual prominence before giving way to the curling, abbreviated shank. The stem displays a gentle downturn to balance the bowl's cant, while the expansion disc echoes the shaping of the shank face. Said stem is noticeably smaller in diameter than the shank, creating negative space to draw focus to the stummel and all of its captivating grain. It's dressed in a light, honey-blonde stain, perfectly showcasing the nuances of the briar's lively flame grain patterns. 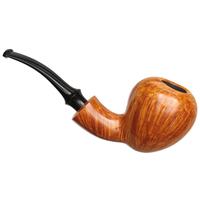 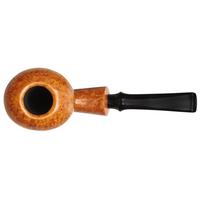 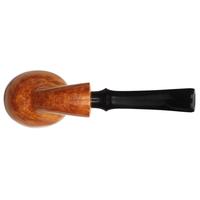 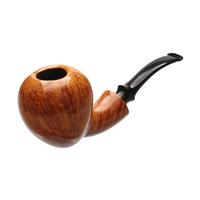 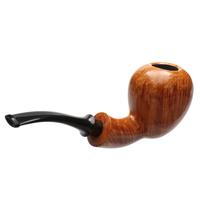