Kazuhiro Fukuda is a master artisan pipe maker, having been a former student of the legendary Sixten Ivarsson in the 1960s, and has dedicated decades to the craft. Fukuda supervises the Tsuge Ikebana workshop and notably mentored fellow Ikebana artisan Asami Kikuchi when she joined in 2013. The Ikebana name literally translates to "living flowers" and refers to the highest form of Japanese flower arrangements — designed to instill peace and encourage an appreciation of the natural world. It's a fitting name for the workshop as each piece promotes that same appreciation for natural beauty with this bent Dublin from Fukuda serving as an excellent example.

Among the many impressive elements this piece features, the bamboo shank extension immediately grabbed my attention as does the bowl's shaping. When fashioning Dublins, Fukuda prefers to take a more organic and rounded approach, with this piece departing slightly from that convention. It flares in traditional Dublin fashion with the plump heel rising upwards to meet the dimpled plateau oriented along the rim. Kazuhiro also isn't one to often utilize bamboo, making this combination of traditional Dublin shaping with a bamboo shank extension quite a rarity within the Japanese artisan's portfolio. The grain orientation is superb, with a gorgeous array of lively flame grain wrapping around the bowl as well as the sides of the abbreviated shank shank. It's been dressed in a vibrant, honey-blonde stain that further brings the grain into the spotlight. A stellar piece that demonstrates Fukuda's immense skill and why Ikebana pipes are widely respected. 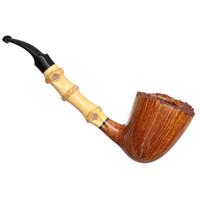 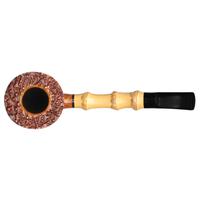 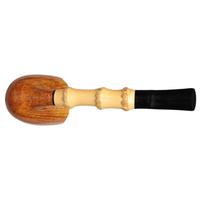 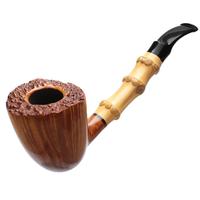 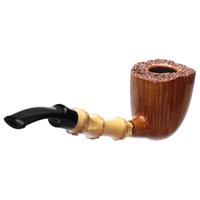 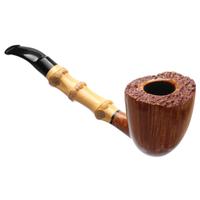 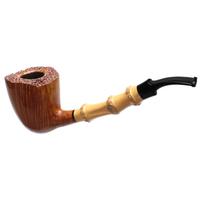