Tsuge has been Japan's premier pipe marque since the mid-1900s, dedicated to quality briars, and in 1970 even sent a pair of their most promising artisans to study under the legendary Danish master Sixten Ivarsson. Kazuhiro Fukuda was one of the two chosen, and went on to become the resident master at Tsuge, spearheading their Ikebana, or "living flower" line of artisan pipes and gaining worldwide renown. Fukuda continues to supervise the workshop in the current era, including personally training and mentoring other artisans such as the talented Asami Kikuchi, who joined in 2013 and is the heir apparent to his legacy.

This bent Dublin well represents the concept of living-flower pipes, with organic curvature and linework, crisply defined but curvaceous and sinuous. It appears to grow naturally from my desk, the flat heel giving rise to upswept flame grain that expands uniformly up not just the bowl, but also the upturned shank. It looks for all the world like it grew just like that, Fukuda following the briar's natural character perfectly toward domed surfaces on both rim and shank end. Ridgelines demarcate each, both undulating slightly, but naturally, as they encircle their respective ends of the stummel.

The weight is evenly distributed, allowing the dramatically flaring piece to sit very stably and providing a reassuring presence in hand. A thin brass ring is inlaid in the shank end, elegantly encircling and reinforcing the base of a push-style stem. Made of black vulcanite with a trim expansion ring, the stem is hand cut and funneled, curling gently downward to offer a comfortable smoking posture. 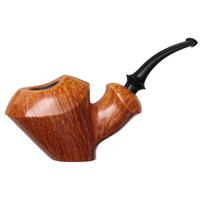 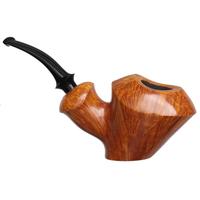 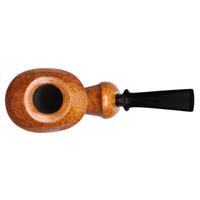 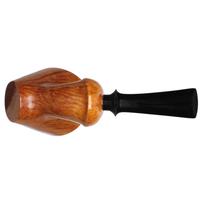 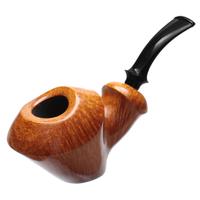 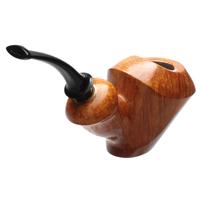 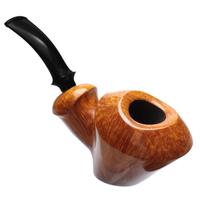 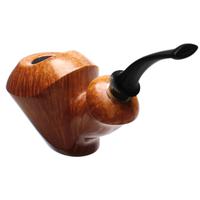