Yoshirou Ohi is one of only three artisans, including master carver Kazuhiro Fukuda and Asami Kikutchi, who craft their own pipes under the venerated Tsuge Ikebana name. Ohi was previously an independent carver and brings years of experience to the brand.

This Blowfish is designed with geometric precision, its asymmetrical curves and lines coming together to form a stunning, unified composition. The plump, convex flanks form the pipe's disc-like panels that when viewed from the front seem to turn to the side, forming the head of the fish. A flattened facet between the two flanks descends from the rim through the heel along the fore and transition at the aft. The shank, too, is paneled, with the topside seemingly comprising the aquatic's creature's upper, turning body when viewed from the bowl's fore. The shank face flares into an irregular-shaped dome of sorts, with the much-abbreviated saddle stem representing the tail.

This is a dynamic, powerful shape that takes an amazing amount of talent to accomplish. It's wearing an auburn stain that showcases a wealth of birdseye, well, everywhere. Both rounded flanks are awash in the beautiful grain, as are both shank sides as well as exactly one-half of the flaring shank end, a playful touch lent by the Japanese carver. The remainder of the stummel is highlighted by cross grain. This piece also sits sturdily upright. It's excellent work and crafted with a deft skill that's the envy of many. 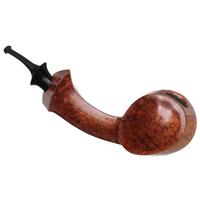 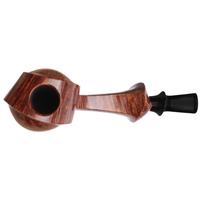 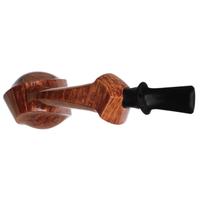 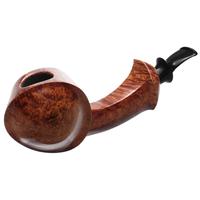 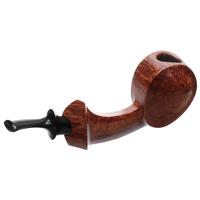 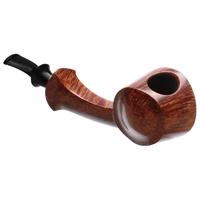 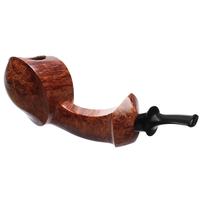