Tsuge's Ikebana series is crafted in a small workshop by three individual artisans, each of whom represents some of Japan's foremost talent in pipe carving. Headed for decades by Sixten Ivarsson-trained Kazuhiro Fukuda, the Ikebana name directly translates to English as "living flowers," earning their work the title of "the flowers of the pipe world" and, when one sees their work, it's not hard to see why. This bent Dublin sitter was carved by Yoshirou Ohi, the newest addition to the workshop, whose experience includes the design and manufacture of precision car parts, award-winning ceramic art, and, yes, award-winning pipe carving. With a background not only in working with briar, but in art and precision design, it's no wonder he was able to create something as striking as this piece.

To begin, yes, this pipe sits, and quite well, resting its laurels on an incredibly petite flattened point on the heel in a display of Ohi's wonderful control of and mind for balance. Each part of this pipe contributes immensely to the overall composition, creating something far greater than the sum of its parts. The stem is just slightly curved, with a large base that's flared toward the bit, tapering to the shank end which, itself, not only tapers gradually to the transition, but is curved counter to the stem and pinched toward the transition, more so to the top, giving it a triangular kind of outline. The transition is similar to that of a Cherrywood, but gingerly wraps around the flanks of the bowl, as if enveloping it, while the topside is more sharp, curving rearward slightly as the bowl's walls reach the rim. The bowl itself is like an asymmetrical inverse cone, the left flank sloping just a touch as it progresses from heel to rim, pushing the rim outward a bit, and the right flank rises at an even angle all the way up, though further than the left side. The wrapping ridgeline that marks the rim undulates around the briar, mirroring the flow of the rim itself which rises on the right and falls near the left, with the highest point near the chamfered rim, creating an utterly singular silhouette. The entire piece is a masterclass in proportioned asymmetry, cultivating an extremely organic aesthetic that, to me, resembles a small bird lighting on a tree branch, the arboreal element intensified by its dark chestnut sandblast which reveals tight and concentric ring grain around the bowl. 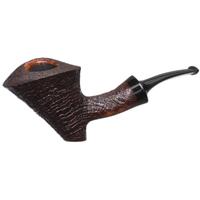 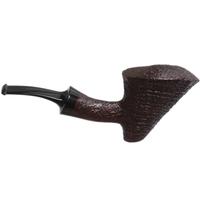 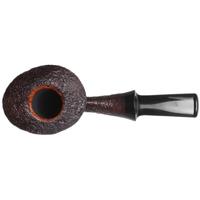 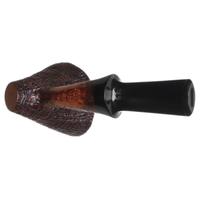 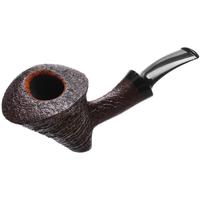 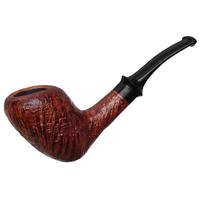 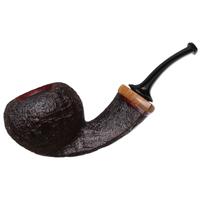 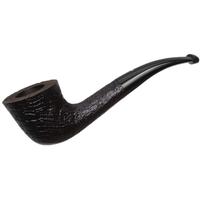 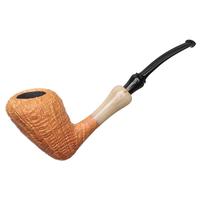