Known as the "Flowers of the Pipe World" Tsuge's Ikebana line is aptly named, as Ikebana refers to the highest echelon of Japanese flower arrangement, the word translating literally to "living flowers." These pipes are made by one of three artisans, with the trio crafting their briar flowers in a small workshop that's overseen by the most experienced of their rank: Kazuhiro Fukuda. This Acorn was carved by Yoshirou Ohi, and his experience includes the design and manufacture of precision car parts, award-winning ceramic art, and, yes, award-winning pipe carving.

I find it quite interesting that Ohi has carved every single one of the Ikebana workshop's reverse Calabash pieces that we've seen, and I can't help but wonder if that is due to his experience with precision manufacturing, as the carving of the shank's condensation chamber requires quite a bit of careful internal engineering. Said chamber necessitates an inflated shank that can accommodate its extra hollowing of briar, seen here in the rapid flare of its build from the transition, coming to a domed end that flattens out at the face, with a trim, handsomely curved saddle stem ebbing out from this face. Despite the massiveness of the shank and its quick build to the end, the transition is quite wide, with plenty of room to drape a thumb, and is pinched when viewed from above, lending some extra dynamic detail to the stummel that is quite welcome. The bowl, of course, is possessed of a flare similar to that of the shank, the two elements working well to balance each other out visually, though the negative space at the transition keeps the visual weight squarely in the middle of the stummel. Said flare begins at the rounded heel spur, making its way toward the high-set waistline that's been treated with a supple rounding as it curves into the rim which, in turn, is chamfered into the chamber. A dark sandblast dresses the stummel here, revealing dense ripples of concentric ring grain cascading though the bowl and shank, striated by visual flame and offering a lovely texture in hand. 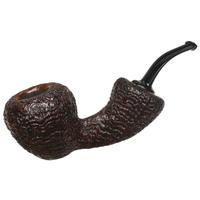 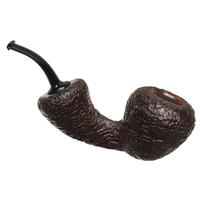 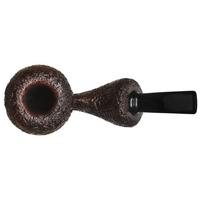 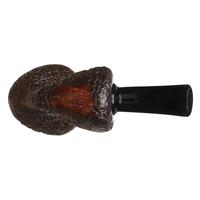 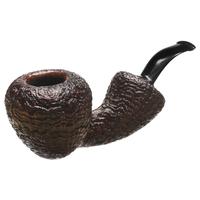