Kazuhiro Fukuda has carved for and supervised Tsuge's Ikebana workshop since its inception. The workshop was founded after Fukuda and other Tsuge craftsmen returned from visits to Denmark and Italy, learning techniques from the established makers there, and Fukuda specifically traveled to Denmark and studied under Sixten Ivarsson and Jørgen Larsen before returning to Japan and establishing Tsuge Ikebana. Today, Ikebana comprises three individual artisans distinguished by their own personal style but united under the Ikebana name, and this Freehand design was fashioned by Fukuda himself.

This Freehand shares elements that we've seen Fukuda incorporate on his Volcano renditions, specifically in the separation provided by the flanking ridgelines and the form's consistent breadth. In profile, the entire pipe presents a consistent parabola reveals by the underside's gentle curve, and the flanks' ridgeline runs perfectly parallel to this undercurve. A lesson in beautiful balance, the ends of this curve — at the foremost point and the shank end — are perfectly in line with each other, establishing a cohesive foundation upon which the rest of the composition is built.

Unlike his Volcano renditions, though, this Freehand prioritizes soft features and a bowl that's more integrated into the stummel, while the base's ridgeline acts more as an accenting feature rather than the focal point. The transition is gradual and smooth-flowing, and it urges the structure forward for a dose of dynamism, despite the form's rather robust proportions overall. Adding to the pipe's balance, the stem's downward turn perfectly mirrors the underside's trajectory, matched by the concave rim. The underside's ridgeline, apart from adding a sense of structure, also serves to differentiate the stummel's stunning grain: Above the line, tendrils of flame grain surge upward, while the entire underside is saturated in swaths of swirling birdseye — all highlighting in a gorgeous, natural finish. 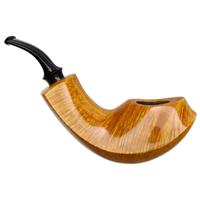 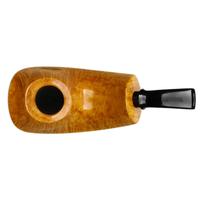 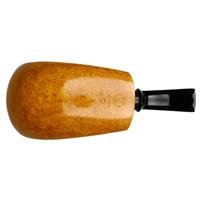 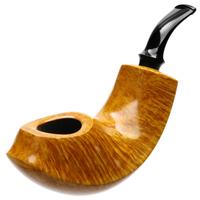 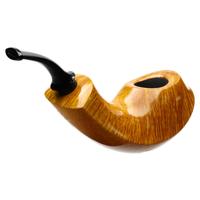 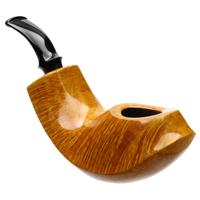 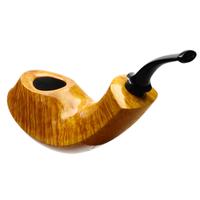 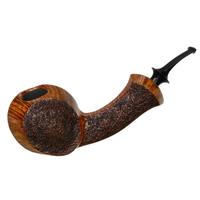 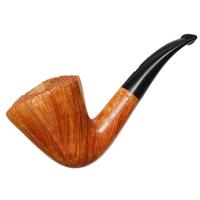