A pipe that embodies Micah "Yeti" Cryder's signature design cues, this Volcano combines intricate line work with a bold color palette and distinctive, full bend. Micah's shaping style often favors fluid, organic forms but they range from the more rounded and minimalist to the more sculptural and complex, as is this case with this piece. Furthermore, he's recently perfected this style of golden contrast stain, and many of his pipes feature Bakelite stems — so much so that Micah's become one of the most prolific and skilled pipe makers in using the antique material. All of those aspects combine in this Volcano design for a pipe that's singular in its composition and readily recognized as the American artisan's work.

In silhouette, this Volcano is fairly standard: The heel is demarcated by a ridgeline that sweeps around the bowl's base, and the sides taper toward the rim. Micah has added subtle flourishes though, with the aft portion of the rim flicking upward in a raised lip and the shank being dramatically upright. This style of bend is typical across Yeti's portfolio, wherein the shank's curl is balanced by the stem's recurve, but Micah positions the stem's downturn closer to the bit, seemingly elongating the profile and lending the impression of greater sinuosity. Such is the case here, even though the overall S-curve is quite conservative, with much of the pipe's full bend created by the dramatic angle of the transition.

It's at the transition that Cryder impresses with stunningly detailed line work. A pipe's transition is one of the most difficult sections of a pipe to work within — the restricted space hindering tools and requiring delicate craftsmanship — and yet it's here that Micah has incorporated the most complex aspects of this design, with deft ridgelines running in close proximity to one another down the sides, over the top, and toward the rim. Those hard edges, then, are echoed along the lower flanks of the shank, as well as the rim, which are defined by slender facets. This structured geometry adds a playful juxtaposition against the shape's overall fluid nature, in a sense creating rapids as when a rushing stream meets jagged rocks.

Finally, Cryder's shaping acumen has maximized this briar block's grain, as the vertical grain perfectly matches the bowl and shank's trajectory. This following of the grain is made even more apparent, then, when viewing this pipe from above: The right side of the bowl stretches further out to maintain the flame grain, resulting in an asymmetrical design that's balanced by the rim's oblong and left-leaning orientation. With strong complexity to offer hours of analysis, as well as an immaculate contrast stain made all the more eye-catching by a Bakelite stem of emerald hues, this Yeti pipe is an exemplary witness to Micah's creativity, craftsmanship, and signature style. 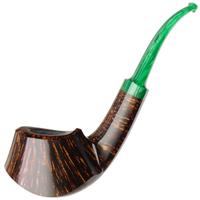 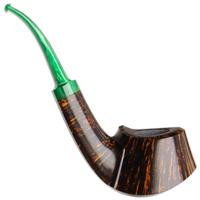 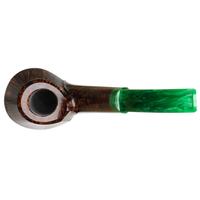 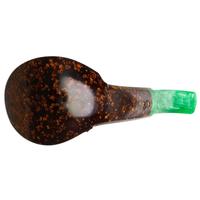 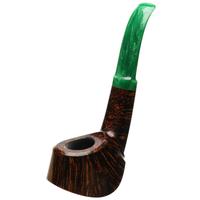 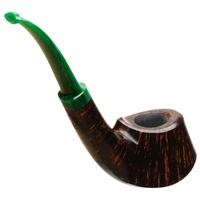 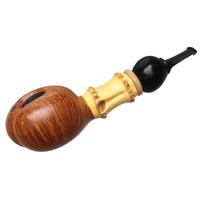 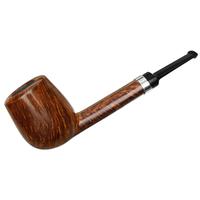