Some months ago I found myself sitting in Adam Davidson's workshop, watching him and Michael Parks doodling pipe designs onto raw briar - the first step in creating a fine artisanal smoker. When I say raw briar, mind you, I mean a single piece of it, onto which they were sketching, scratching out, and adjusting the prospective shaping of not one, but two pipes. These two pipes, in point of fact, each the creation of one of North America's most renowned pipemakers, and both shaped from the same block of plateau.

Concept-wise, they're a matched set, having begun as mirror-image sketches. However, it was important to both Adam and Michael that they'd each feel free to take the design, finish, and final presentation of both pipes where ever their inclinations and individual styles as artisans may lead, instead of trying compromise either pipe into some manner of Davidson/Parks hybrid. They'd both play to their own strengths, and produce the best they could.

It worked, as you can see. The Michael Parks is unmistakably a Michael Parks - dynamic, rugged, and scoured with a sandblast of remarkably depth and definition. Adam's, likewise, is unmistakably Adam's, A Danish-influenced beauty with an easy (if quite deep) flow, a light, fine sandblast, and one hell of a horn accent. And yes, though the lengths of stem and shank do differ between the two, chamber breadth is matched, and depth varies by only a few hundredths of an inch.

Of course, Michael being an avid outdoorsman, and Adam being a fellow who is very keen on the Revolutionary War period, your usual presentation box or stand just wasn't sufficient. They wanted something for the presentation that reflected a common ground between both their inclinations and personalities. Well, fortunately enough, along with forging, glass-blowing, and briar-shaping, Adam also happens to have good hand for fashioning leather goods. Thus, included with the set is a high-quality, hand-stitched leather bag of rustic design, for which Adam took inspiration from the hunting pouches carried by colonists and frontiersmen of the 18th century. And like good briar, the leather itself is well-aged; it'd been following Adam from move to move for fifteen years, being the spare half of a hide he'd made a blacksmith's apron from as a teenager. 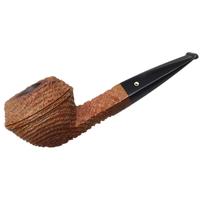