In a manner similar to a bent Dublin we received previously from Adam Davidson, this rendition juxtaposes robust dimensions against a refined sense of poise and grace. Larger pipes, and large objects in general, often come across more stolid and static, prioritizing hearty muscularity over sleek dynamism — in the same way that a semi truck embodies power and might compared to the aerodynamic litheness of a sports car. This pipe from Davidson, however, merges those two seemingly contradictory aspects to offer a pipe of commanding visual presence that still retains a strong degree of fluidity and softness.

Much of this genteel presence is accomplished through the shank-and-stem combination: The stem is a sleek saddle stem configuration, slightly longer than the shank and demurely downturned to balance that shank's slight upward curve. Said shank is similarly lithe, being wider than it is tall for a reduced profile, and it flares softly at the end into a more rounded face, as opposed to a hard-lined termination. Such a design cue was relatively common among early Danish artisan pipe makers and, later, Japanese artisans — both from whom Davidson draws much inspiration. The stem meets the shank, then, via a military mount configuration, with a trim ring of brass inset around the mortise opening.

Contrasting the shank and stem's lithe nature, the bowl is tall and thick-walled, promoting a substantial feel in hand, yet it's forward cant, outward flicking fore, and oval shaping maintain the composition's overall dynamism and momentum. Wearing a deep, plum-hued stain of subtle contrast and a perfectly consistent sandblast, the stummel reveals an immaculate show of ring grain, seeming to melt down the bowl, with a touch of plateau along the rim blending seamlessly with the surrounding birdseye. 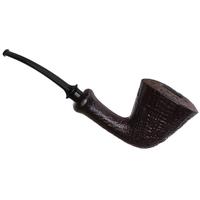 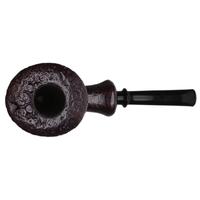 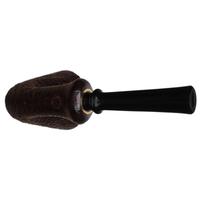 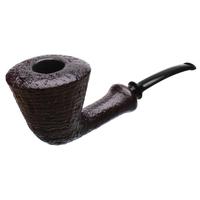