Every July since 2015, Smokingpipes has hosted the American Pipe-Making Exposition, an event that showcases the work of a number of America's best artisan pipe makers, all united under a central theme. This theme acts as a guideline which sets the stage for pieces that, while they may share a similar trait, are each unique, showcasing the singular sensibilities of the artisan who crafted it. For 2022, the theme was Calabash engineering, and, to that end, Adam Davidson has presented us with a highly sculptural Victorian Calabash that evokes the Cavalier and Calabash shapes through both its looks and engineering.

Davidson's abilities as both an artist and artisan are on full display with this piece, as he's drawn inspiration not only from the Cavalier's Tyrolean origins, but from the forms of Ancient Greek amphoras, Victorian lamps, and the human heart. The latter of these stood out to me immediately, as every element of this pipe is joined at a central "body" of sorts that not only acts to connect the bowl, stem, and moisture cap, but also acts as the cooling chamber thanks to the hollow drilling inside. Essentially the greater stummel, this body is built in a Y-shaped configuration that sees briar extending at the bottom and the top fore and aft sections, with the aft extending further than the fore and holding the stem opposite the bowl. Each of these extensions flares out to a firm ridgeline before taking on a domed shape which is hollowed in the center, the overall shaping here conjuring images of the human heart, with each of the extensions akin to the arteries and veins that stem out from it.

This outline is essentially a heavily modified imagining of Davidson's own Cavalier design and his familiarity with the particular drilling and engineering that goes into making this kind of pipe works to his benefit, as he's able to freely alter the shape and modify the internals with relative ease. That being said, there's nothing about this pipe that strikes me as easy to craft, given all of its soft curves and fluid lines, especially through the stem. Said stem is an S-curve in itself, with an expansion ring at its base that stylistically mirrors the ridge at its mounting point and, when looked at in concert with the lines of the body, lends the aft side a recurve look that draws the eye. The body itself is possessed of myriad curves, with the middle's inflation to accommodate the cooling chamber pushing the sides out while the fork at the top sees either extension sweep softly into the other.

The bowl is quite striking, compressed at the flanks and broad through the fore and aft, ebbing out of the body at an angle that urges the eye toward the fore of the rim which is the highest point. Its heel features a rounded spur that adds further curves to its already shapely appearance, the fore and aft walls as well as the flanks comprising various arcs to the rim. The moisture cap at the bottom is stylized as well, eschewing the usual form of a foot in favor of shape that evokes the peak of a Victorian lamp or finial, ensuring that every facet of this pipe is appreciated by wandering eyes. All of the briar here has been cut and carved out of the same block of cross grain burl, meaning that both the bowl and body come from the same source, and the crisp sandblast that dresses them both showcases the high quality of that source thanks to their dense patterns of birdseye and ample displays of growth rings.

What struck me immediately about this pipe was the incredible lengthiness here, stretching out to a full 16 inches in height from button to moisture cap, that spreads out much of the weight of this piece. Despite the weight here, the balanced distribution and tightly-knit nature of the pipe's width enable it to be comfortably clenched as long as one doesn't move around too much. If you'd rather hold it, then don't fret, as the contours of the body and the wideness of the Y-shaped fork offer an extremely comfortable feel in hand with plenty of room to drape digits. 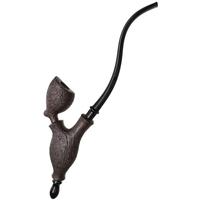 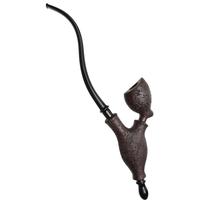 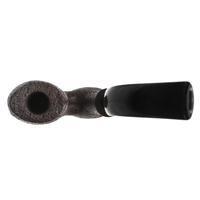 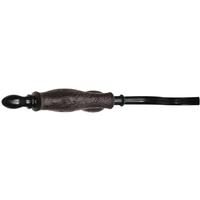 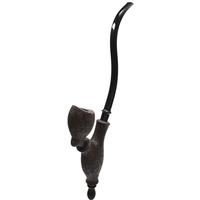 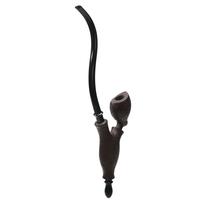 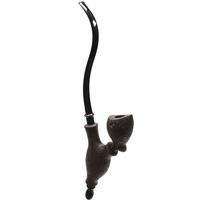 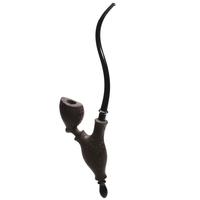 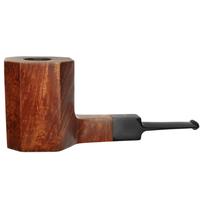