Along with crafting pipes under the J. Alan name, Jeff Gracik has notably collaborated with Russian artisan Vladimir Grechukhin and this dual-finished bent Apple displays a strong influence from Vladimir's style. Its shaping cues and finish call to mind a collaborative piece we received a few years ago. This particular design is decidedly plumper and stouter in its proportions than the aforementioned example and is undeniably rife with character and substance. A crisp ridgeline wraps around the transition, calling to mind Lars Ivarsson's signature Cup and Ball shape and has been implemented here to separate the chubby bowl's sandblasted finish from the smooth shank. Along with the bowl's smoldering contrast stain and the rippling ring grain it highlights, my favorite features on this piece are the subtle touches Gracik has added. The smooth rim is neatly chamfered, stained the same mahogany hue as the shank while also complementing the bowl's warm tones. Saddle stems are a signature feature on J. Alan pipes and on this piece its domed base echoes the bowl's chubby disposition. The upward kicking gesture of the shank continues through the stem before ending in a graceful downturn. A generous wedding band of sterling silver adorns the shank end, further accentuating the striking aesthetics. 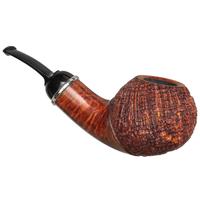 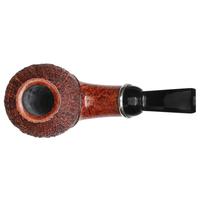 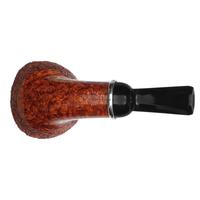 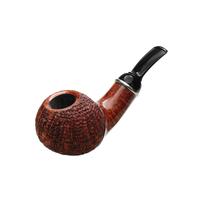 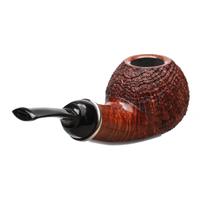