Why should one purchase a J. Alan pipe? Well, there's Jeff Gracik's engineering, which delivers perfectly uninterrupted airflow, dry smoking, and the best performance possible by any given block of briar. Then there are his visionary design skills, which render traditional shapes with impressively creative modifications as well as new shapes that extend what was previously thought possible in the craft. And then there's his execution, which exemplifies flawless line work, an attention to detail that satisfies the most obsessive of examinations, and finishing that is the equal of any pipe maker anywhere and from any point in history.

Behold, for example, the Discus pictured here. The shank expands in a vertical oval, and the curvature complements that of the bowl. It terminates at a right angle to its implied lines, while the base of the stem is offset to raise the angle of the bit in concert with the continuation of those lines before contracting to the flat, saddle configuration that curves ever so softly to the crisp lip button, which houses a perfectly engineered termination of the smoke channel with a widening of smoke dispersal for enhanced tobacco flavor.

The bowl in profile resembles the proportional stance of a Tomato, but its width is oval in harmony with the oval of the shank, perhaps most pleasingly visualized at the rim, which is beveled in its own oval. That detail particularly elevates the design because a pipe smoker interacts with the tobacco chamber almost as intimately as with the mouthpiece, and its visual appeal is remarkable. The briar has been oriented for cross grain, and that too is a pleasing decision, because this rare block reveals birdseye that virtually percolates with implied energy at the left and right flanks, all beautifully illuminated by a contrast stain expertly applied and finished with an evenly distributed poliah that few may even aspire to. It's a pipe that is monumentally impressive in photos; imagine what it might be like to own and smoke a composition of such elevated refinement. 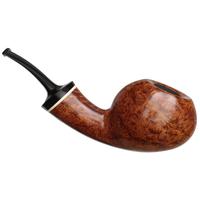 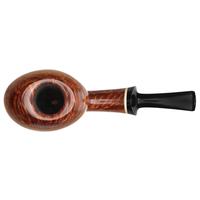 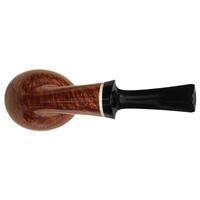 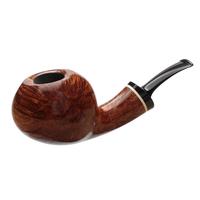 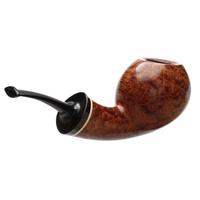 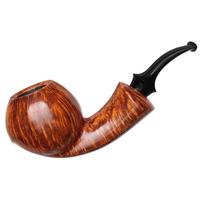