The asymmetrically domed rim of this Mushroom from J. Alan descends the bowl lower on the left than on the right, while the right side displays rugged plateau and the chamfered inner ring around the tobacco chamber undulates across the top. That ragged aspect is echoed at the end of the shank, which introduces the domed base of the stem. The sandblast reveals impressively tight growth rings circling the bowl as well as the shank, and the bowl is somewhat cinched at the waist, extending on its forward flank in balance of the complementary downward curve of the stem.

This piece sits proudly on its smooth heel for full visual appreciation of its design even while smoking it. A subdued crimson stain commends its darkly natural-esque disposition, while the gently contoured transition joins shank and bowl for an impression of separate elements. J. Alan pipes are made by Jeff Gracik in San Diego, California, and his style continues to impress with innovation and prolific inspiration, as this outstanding smoking instrument so ably demonstrates. 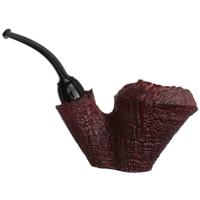 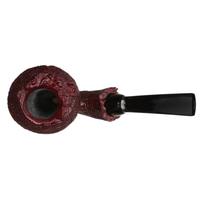 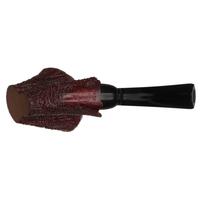 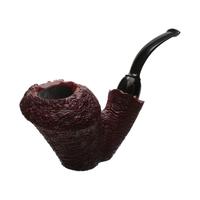 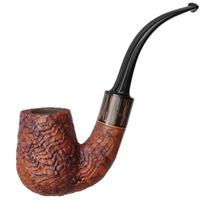