Jeff Gracik, the artisan behind J. Alan pipes, lives in San Diego, California and enjoys surfing when he's not busy crafting some of the world's most beautiful and expertly engineered smoking instruments. It's only fitting then that Gracik stamps his most exceptional pieces with a wave symbol, which is the most prestigious designation a J. Alan pipe can receive. The "Wave" stamp is also incredibly rare and the last time we received a J. Alan pipe with such an appellation was over eight years ago. Just by looking at this Fugu rendition, it makes perfect sense why the American artisan felt this piece deserved such a high honor: It's an impressive example of when grain, shaping, and engineering all work together in harmony to produce an extraordinary pipe.

The Fugu (or Blowfish) is a shape that lends itself well to a wide range of variations and is typically defined by paneled flanks, bisected by a band of cross grain to leave birdseye positioned along the disc-shaped panels at the flanks. But that's a simple definition of a piece that's far from simple. The line work on this Fugu is complex, intricate, and wonderfully utilized to maximize the breathtaking grain this piece of briar possesses. Multiple ridgelines emerge from the shank face and inform the bowl's shaping, notably outlining the bulging flanks and coming to crisp, defined points along the rim. Those ridgelines follow the grain orientation perfectly as hypnotic whorls of birdseye dominate the flanks while streaks of cross grain ride along the entire top and bottom of the stummel.

Two patches of plateau add visual and physical texture to this piece — one patch placed along the right flank while another graces the shank end. Jeff's stem work is always impeccable, and his stems are some of the most meticulously crafted in the world. This piece is a superb example, the base of the stem aligning flawlessly with the shaping of the shank before terminating in a subtle downturn just before the lip button. It's a spectacular composition, crafted by one of the most talented artisans in the modern era. 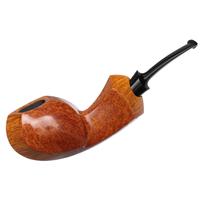 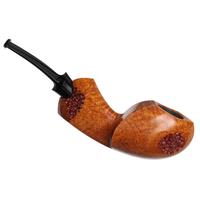 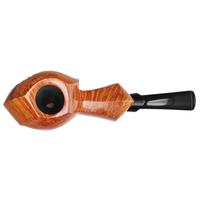 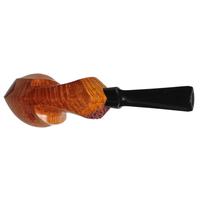 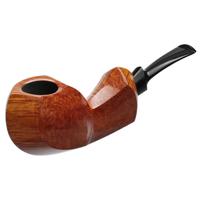 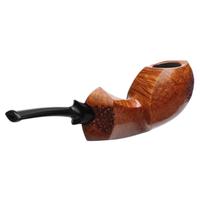 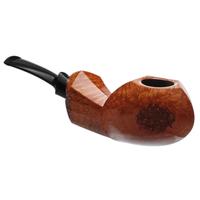 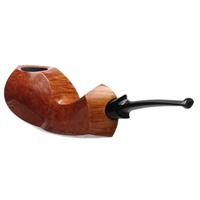