While Swedish artisan Bo Nordh invented the Elephant's Foot, many carvers and workshops have taken his original design and continued to build upon it. This rendition comes from J. Alan, an American carver that studied under pipe makers like Todd Johnson, Jody Davis, and Tonni Nielsen. He learned a great deal about functionality and engineering during his studies, and he now enjoys a loyal following of discerning collectors. He's a carver that was obviously influenced by Danish pipe making, but his work is distinctly his own, elevated by a keen eye for natural lines and handsome finishes.

This rendition of the Elephant's Foot adheres closely to the classic form, with a flared rim and a subtle concave curvature to the fore and aft of the bowl. Almost Shield-like in its presentation, the broad, pronounced fore is lent definition by a band of briar that bifurcates the bowl, wrapping from the rim to the heel and back again. Three knuckles of bamboo extend the shank and bridge the stummel to the arcing saddle stem of jet-black vulcanite. The placement of the bamboo reinforces the organic nature of the shape, and its warm color immediately livens the overall composition. While the fore and aft of the bowl are dressed in a dark, rugged sandblast, the rim and traversing band of briar are smooth and stained a warm, auburn color that accentuates the briar's cross grain construction. The Elephant's Foot is a difficult shape to fashion, demanding a briar block suitable for the shape, not to mention requiring a great deal of labor, all of which makes this piece all the more striking. 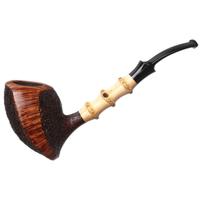 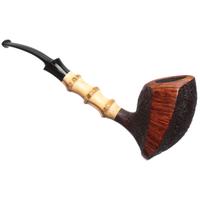 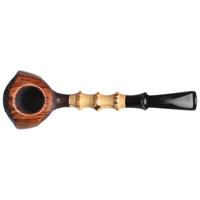 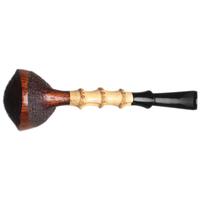 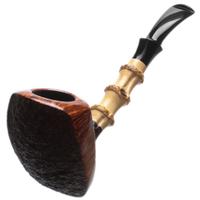 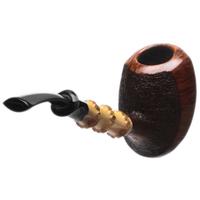 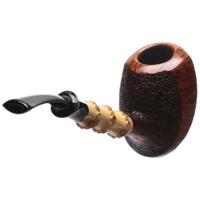