American artisan Jeff Gracik of J. Alan pipes, at the beginning of his career, made journeys to learn from master pipe makers Todd Johnson and Jody Davis, and then Danish carver Tonni Nielsen. He learned a great deal about the functionality and artistry required to craft a truly refined smoking instrument, and since starting his career some years ago, Gracik's pipes have become some of the most sought after pieces by discerning collectors the world over. While his work possesses a particular affinity for the soft features and organic shaping of the Danish tradition, his work has become something entirely his own, elevated by the American carver's keen eye for gorgeous finishes and playful line work.

This Mushroom features a broad, undulating, softly inflated rim that's encased by a firm rigeline that wraps around the top of the bowl and lends the piece its distinctive shape. The rim favors the fore a bit more than the aft, which, combined with the bowl's foward lean, lends the piece a sense of dynamic momentum. The ovoid shank extends from the low-slung transition and balances with the bowl's proportions in profile before giving way to a half-saddle stem of jet-black vulcanite. The sleek, flattened lines of the shank and stem keep the overall composition tidy and elegant, not allowing any unnecessary visual noise to distract from the bowl's eye-catching form.

The stummel wears a stunning smooth finish and warm contrast stain, with tight tendrils of flame grain reaching from the firm, subtly pointed heel to the rim across the flanks of the bowl. The rim displays a whirling, dense constellation of birdseye that's mirrored across the top of the shank, making for an absolutely stunning visual feast when viewed from above. The dark color of the mouthpiece perfectly complements the chestnut hues of the stummel for a classy, traditional palette that can't help but charm. 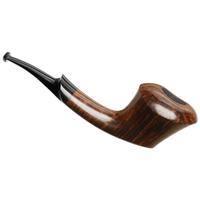 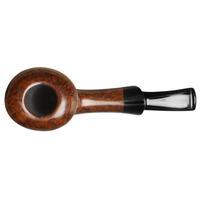 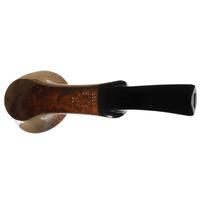 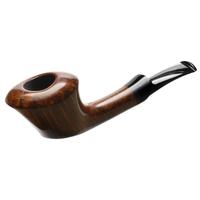 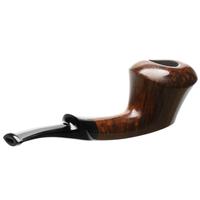