Traditionally speaking, the Calabash isn't a particularly complex shape, at least not from an artistic perspective. In the hands of Jeff Gracik, though, its nuance and intricacy is elevated substantially. At its most basic, the Calabash features a curved and flaring stummel with a hollow interior, fitted to a chamber cap. Historically, this hollow stummel was fashioned from gourd and the chamber cap from meerschaum, but in recent years artisan pipe makers have created their own briar renditions, with this particular one from Gracik paired to a boxwood rim.

Though the chamber cap's rim is of boxwood, the chamber itself is a briar inset, with the innermost rim of briar left smooth and unstained to add a second hue against the boxwood's lighter tone. This chamber cap is indicative of the Calabash shape, and yet Gracik has shaped it slightly differently than would be considered standard: Instead of a convex dome, the outer edge of the boxwood is concave, trimming down the typically bulbous form and adding a sense of modernist sleekness to the profile — a motif that aligns with other Calabash renditions we've seen from the American carver.

The briar stummel, then, continues this modern motif with a combination of more tight-knit bend and intricate ridgelines traversing the flanks. Rather than reveal the traditional Calabash's languid arc, this J. Alan rendition turns up tightly at the transition, lending more prominence to the heel and more angular disposition that matches with the aforementioned sleekness. A ridgeline descends each flank to frame the briar's cross grain, and these ridges become sharper as they continue into the shank, curving upward and curling back toward the bowl to meet at the shank's fore. This forward-urging nature of the shank hints at the Nautilus, and the ridgeline's orientation creates accenting asymmetry, with the right side's curling down near the heel and back up the aft side of the shank, while the left side's curls more suddenly at the transition and closer to the shank's fore. When viewed from above, the shaping of these ridges becomes apparent as the cross grain along the shank face angles in a manner similar to the ridge's trajectory.

From this face, the hand-cut vulcanite stem extends out of a military-mount configuration, with the mortise reinforced by brass, and the stem's saddle portion matches the forward-urging nature of the shank, integrating the mouthpiece into the composition and using it to further the profile's dynamism. The stem's downward turn also aligns with the stummel's shaping: Its curvature is equal to that of the heel and the lower bowl's fore, while also serving to comfortably balance the pipe when clenched.

Lastly, the briar is contrast-stained a rich, walnut hue to bring out the flanks' cross grain and the fore's dizzying sea of birdseye. Internally, Gracik has also stained the top of the cap-and-bowl junction for a perfectly uniform presentation, and the top is lined with cork to ensure a secure fit, while also allowing for easy removal when cleaning. Construction combined with shaping and grain elevate this piece to the upper echelons of Gracik's portfolio — an accolade cemented by this pipe's Wave grade, which denotes the artisan's finest work. 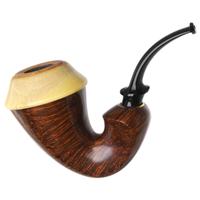 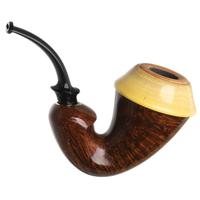 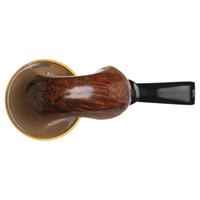 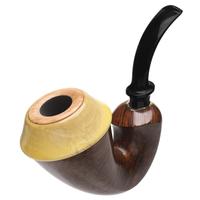 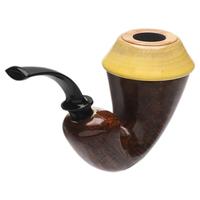 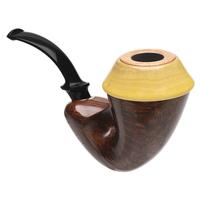 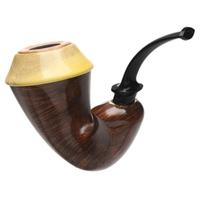