Jeff Gracik is the American artisan behind J. Alan pipes, and his achievements have made him one of the most easily recognizable, well-regarded carvers in the United States, if not the world. His journey into pipe making began with a pair of briar blocks purchased while he was studying for his graduate degree, hand-carving them to make use of them himself and fitting the two stummels with preform stems. This first step ignited within him a passion for the art of carving, leading him to study under some immensely talented artisans, the first of whom was Todd Johnson, and to work with both Jody Davis and Tonni Nielsen, laying the foundation for his current career as an artisan.

We've seen Volcano renditions from Gracik before, though many of those have been sleek, low-profile renditions of the shape that emphasized gentle momentum and subtlety. This is decidedly not that same style of Volcano, with a full-bodied bowl and a high-reaching stretch of shank and stem which not only poise the combination for comfortable smoking, but lend the silhouette an active, lively stance. The shank here sweeps up and out from a wide transition, flaring easily as it reaches toward its end, meeting a junction that's marked by a trim band of Ivorite. The stem base continues the flare, though the stem's saddle orientation steps down before taking on a slight downturn to the button. Up front, the bowl takes center stage, sat atop a broad, domed base that sees briar pushing out from a hollow-carved edge, the base marked by a pair of wavering ridgelines with a slight taper between them.

When I first looked at this pipe, I wasn't convinced that it could sit. I was wrong, however, as it sits comfortably and stably on this base, the bowl taking on a striking rightward lean as it pushes upward from it. When this pipe is actually sat on its base, this lean becomes immensely pronounced, and draws ample attention to the asymmetrical build of the stummel. As a Volcano, the bowl is possessed of an arcing taper to the rim, though the flanks enhance this by adding further compression, something that the left side exemplifies. The taper here lends the bowl a striking forward lean, placing the rim at the forefront and showing of its subtle internal chamfer into the chamber. Dressing the stummel here is a vibrant mahogany-auburn contrast stain that unveils streaks of dense flame grain that follow the outline of the bowl and shank remarkably well, with the rim and broad base awash with swirling birdseye. 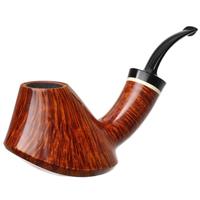 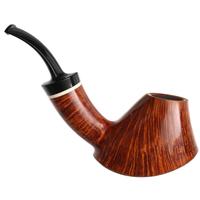 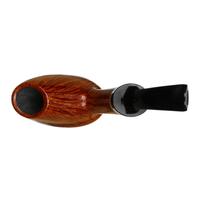 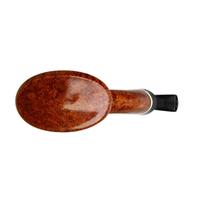 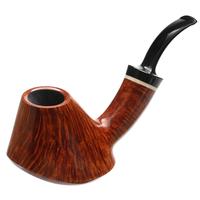 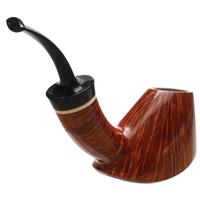 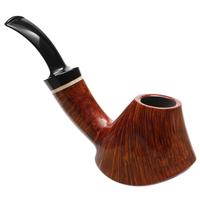 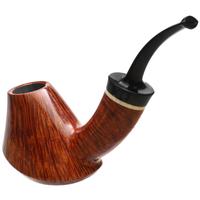