Centered around a specific them each year, Smokingpipes' annual American Pipe-Making Exposition showcases the work of some of the most talented artisan carvers in the United States, and 2022's motif was Calabash engineering. The Calabash is an old shape, yet its one not defined by exact form, but rather construction: A removable tobacco chamber cap is set atop an expansive, internal cooling chamber. This second chamber allows the smoke to cool and any condensation to dissipate before entering into the airway. Most traditionally, Calabashes have been fashioned from dried, hollowed out gourds fitted with meerschaum caps, but in recent decades, artisan pipe makers have expanded on the construction in myriad creative manners. The 2022 Exposition saw pipe makers craft everything from classic gourd Calabashes to more sculptural, Freehand designs like this Nautical Dublin by Jeff Gracik.

Jeff isn't a stranger to Calabash construction; he's fashioned a number of them over the years, but the majority have catered to the more traditional Calabash form, marked by sweeping gesture, dramatic curvature, and upward flare — though elevated by specific flourishes, such as subtle panels and ridgelines. For the 2022 Exposition, however, Jeff wanted to experiment with one of his signature designs, rendering it as a Calabash. His Nautical Dublin shape is a bent Dublin iteration defined by a slight bend, a distinctively forward-urging dynamism, and most significantly, a ridgeline that runs from the shank end to the rim.

The general profile of this Nautical Dublin Calabash aligns with Jeff's characteristic Nautical Dublin form: The transition curls gently into a flaring bowl, and the underside is marked by a crisp ridge that favors the leftside, curling up to the rim in a manner that adds asymmetry to the composition while also evoking the look of a ship's prow. Where this Calabash rendition differs is in its hollowed cooling chamber and removable chamber cap. The cap is made from the same block of briar as the rest of the stummel, secured via a cork lining along the top of the cooling chamber, and it softens the form with gently rounded nature that's subtly concave as it reaches toward the chamber. Shaped to perfectly match the briar beneath, the cap features a point at the fore that aligns with the termination of the aforementioned ridgeline, beautifully integrated the cap into the overall compositional aesthetic.

Distinguishing these two pieces of briar, though, are their color palettes. While the stummel wears a deep, chestnut contrast stain to highlight flaring flame grain along the flanks, the cap is natural, unstained briar, offering an accenting touch and revealing swirls of birdseye throughout. It's all completed by a hand-cut saddle stem of traditional, jet-black vulcanite, the base of which continues the shape's defining ridglinee through the base but with the stem base's shoulder slightly angled to counterbalance that ridgeline's leftward orientation. It's a beautifully refined and elegant piece from Jeff, one that appears unassuming at first glance but impresses with subtly intricate details throughout — all elevated by pristine engineering and complete aesthetic. 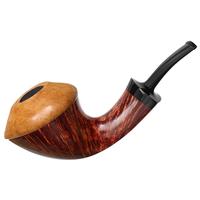 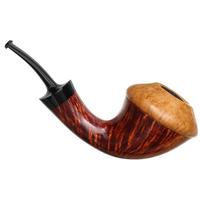 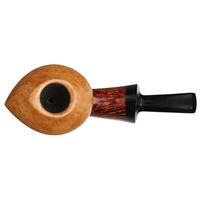 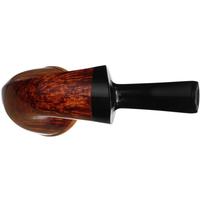 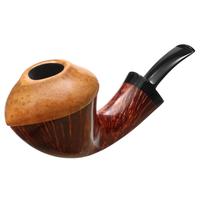 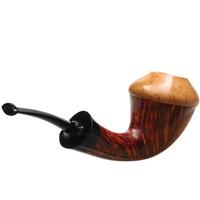 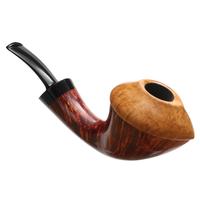 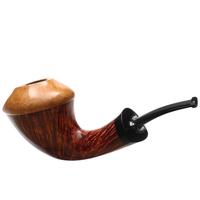