Jeff Gracik is the American artisan behind J. Alan pipes, and his achievements have made him one of the most easily recognizable, well-regarded carvers in the United States, if not the world. His journey into pipe making began with a pair of briar blocks purchased while he was studying for his graduate degree, hand-carving them for personal use and fitting the two stummels with preform stems. This first step ignited within him a passion for the art of carving, leading him to study under some immensely talented artisans, the first of whom was Todd Johnson, and to work with both Jody Davis and Tonni Nielsen, laying the foundation for his current career as an artisan.

While Gracik is no stranger to Calabash renditions, this particular imagining of the historic shape is extremely unique, with a form that remains sinuous though is remarkably plump through most of its build. As a bent Apple-style of Calabash, I would expect nothing less, but even considering the bent Apple's necessity of curvature, this is a striking pipe whose fullness of form keeps the eye pulled toward it. Particularly, the eye is drawn to the bowl, a rotund expansive affair that's capped with a tall, broad, domed rim of boxwood, its chamber and inward chamfer to said chamber being made of briar. This rim drapes over the bowl, continuing its rounded lines at a slightly greater scale and further magnifying the incredible curvaceousness of the silhouette, all while providing a comfortable feel in hand with more than enough reassuring substance to remind that it's there.

An open transition leaves plenty of room to drape a thumb or digit behind the bowl and marks the start of a sweeping shank that lifts sinuously out of the lower bowl, flaring boldly as it does and meeting a smartly downturned saddle stem whose large base continues the flare. Not only does this combination complete an S-curve through the stummel that's quite pleasing, but from the base of the stem to the start of the rim cap, we see an undercurve whose measured travel not only serves to pull the eye forward, but lift the fore of the stummel and enhance the presence of the entire composition's curves. Despite the thick build of this pipe and its large areas of intrigue, the feel remains balanced, with the arcing saddle bit providing some levity against the bowl while still keeping most of the visual weight around the transition. Dressed in a warm chestnut contrast stain, the stummel of this piece showcases some wonderful flame grain across the flanks which follows the shaping fantastically, the underside providing a basin of birdseye, with the pale hues of the boxwood offering a wealth of visual contrast. 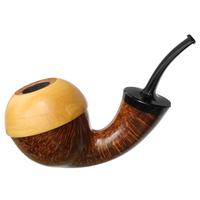 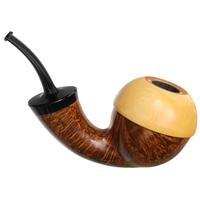 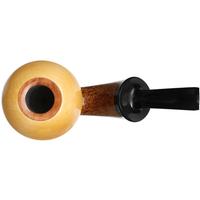 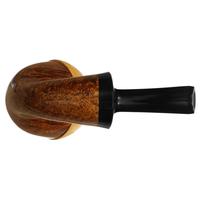 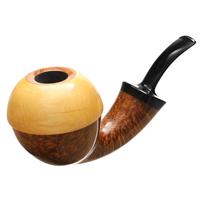 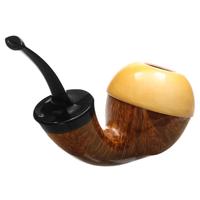 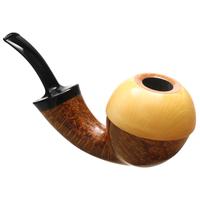 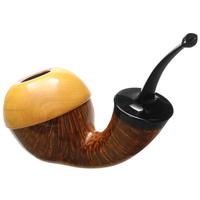