The Fugu, or Blowfish, is a distinctly artisan shape — one not found on classic shape charts of old. It's a design that requires deft, freehand shaping on a sanding disk resulting in bespoke detail and one-of-a-kind individuality, often marked by asymmetry and distinguished by accenting panels and ridgelines. The shape began among Danish artisan pipe makers and is, at its most basic, defined by a central panel that highlights cross-cut grain orientation, with cross grain framing said panel and bisecting flanks studded in birdseye. Early Danish renditions of the Blowfish displayed more symmetrical shaping, with a nearly spherical bowl, but over the years, Japanese pipe makers expanded upon this design to create the Fugu — Japanese for "blowfish." The Fugu rendition differs from those early Danish versions in its asymmetry and in how the ridgelines of the bowl's defining panel flick outward at the transition, creating fin-like aerodynamism. Moreover, the shape often curls in such a way that mimics a fish's movement through water, and the shank often presents asymmetric paneling to mirror that of the bowl.

This particular Fugu rendition from American artisan Jeff Gracik is an archetypal version of the Japanese Fugu, yet it's one of more restrained minimalism compared to many often highly stylized and dramatic iterations. Such reservation fits in well to Jeff's signature style, one that focuses on clean lines and stunning grain, letting each shape highlight the briar in the best way possible without ostentation or distraction. In this piece, he's catered exactingly to the Fugu's characteristic design cues: A panel arches over the top of the bowl, curling through the fore and traveling the entire underside before ending at the stem base. The rest of the shank, however, remains softly rounded, meeting the transition where the panel's ridgeline jut outward slightly for that aforementioned, fin-like personality. The right side's "fin" protrudes slightly further than the left's, and this aesthetic choice balances out the panel's leftward leaning across the bowl, creating a tastefully balanced asymmetry and a right-to-left gesture through the stummel. Stunning cross grain and birdseye elevate the bowl, perfectly matching Jeff's shaping, and such grain is highlighted in a vivid stain of reddish auburn. 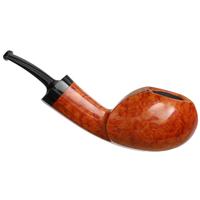 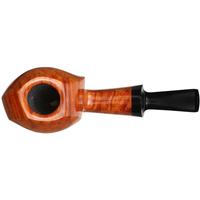 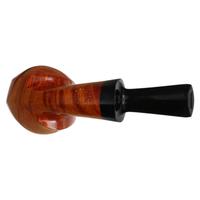 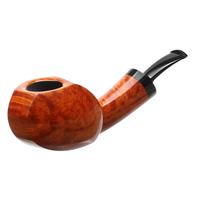 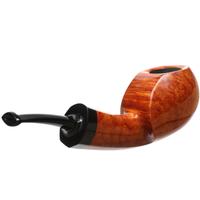