From an artistic perspective, pipes are sculptures and, thus, inherently incorporate geometric principles of line, form, proportion, and balance. That said, this Torus shape from Russian carver Andrey Grigoriev draws inspiration from a very specific geometric element. In geometry, a torus is a ring-shaped surface with numerous subsets. In the real world, tori are most often seen as solid tori, with examples including O-rings, non-inflatable lifebuoys, bagel, and ... well ... this Grigoriev pipe. Most closely resembling a Tomato, this rendition from Andrey isn't a perfect torus by purists' standards; however, the inspiration is clearly evident in the ringed shape of the bowl and how it curls inward both at the rim and at the base for a rounded, doughnut-like aesthetic. It prioritizes breadth over height, resting nicely in the palm and conforming well to wrapped fingers, and the shank acts in a supporting role, being oval in cross-section for a reduced height in profile. A subtle expansion ring along the saddle-stem base adds just the right degree of accenting interruption to the lines of the silhouette, and the stummel is shaped in such a way that maximizes the briar's grain: Birdseye saturates the broad rim and underside, with slender bands of vertical grain sweeping up the sides — all in a dramatic contrast stain of walnut and golden hues. 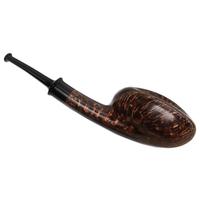 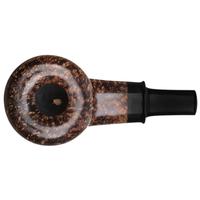 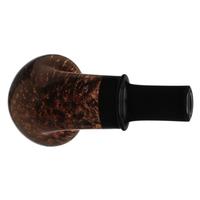 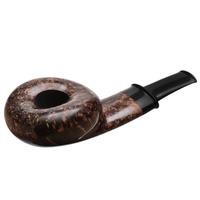