Kurt Balleby is one of the most well-respected artisans in all of Denmark, and for good reason. Since his start in 1983 working with Kai Nielsen and Preben Holm, he has not only received tutelage from masters of the craft, but has developed an exacting process of quality control and a unique shaping style. In 1989 Balleby invested the money he made working for others in a workshop all to himself, devising a method of production that involves 150 individual steps which ensure his pipes are held to an incredibly high standard, and he maintains a low annual production rate. This bent Bulldog rendition is distinctly Balleby, and contains a myriad of subtle (and not so subtle) shaping cues that make it is one of his signature designs.

To me, the most striking element of this pipe is the shank, as it retains the diamond shape that tradition dictates a Bulldog must have, though it is altered through the addition of two panels on the flanks, as well as the flattening of the overall form into a more ovoid shape (of which I am notably fond). These two extra panels taper to the shank end and flare to the cheeked transition, the ridgelines they necessitate sweeping upward to meet the bowl, with the bottom two ending exactly at the bottom of the first of the two beadlines which festoon the bowl. I need to expound upon the transition, however, as, while it is cheeked in the usual manner, the extra detail given the shank provides the bowl a rare opportunity: Where the transition flares into the bowl on the flanks, where are carved the additional panels, the bowl drapes itself over the lower ridgelines, giving the shank the appearance of cradling the bowl. The sculptural, architectural aesthetic cultivated through the use of ridgelines makes this effect unique, especially as this firmness is contrasted by the supple bowl's rounding and gentle taper.

The dual beadlines are set very low and act as the pipe's center of gravity, as they coincide with the waistline, and it's this low-set posture that defines Balleby's Bulldog renditions. The rim is domed slightly, with a subtle chamfer leading into the capacious chamber, the thick, insulating walls ensuring a comfortable smoke. The shank end is additionally structured through the use of a boxwood accent, flaring out suddenly and retaining the shape of the shank, leading to a trim and demurely downturned stem. The stummel is dressed in one of Balleby's exceptional stains, the auburn hues highlighting striking straight grain encircling the upper portion of the bowl and lining the flank panel of the shank. This stain additionally reveals a stunning birdseye pattern that is present on the rim and top side of the shank, though is most prominently and stunningly showcased on the underside of the shank. 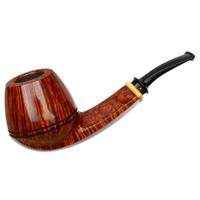 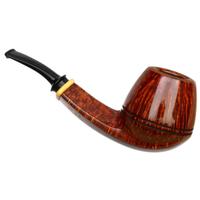 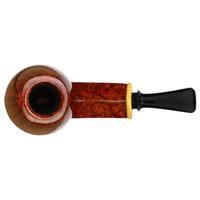 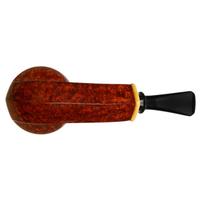 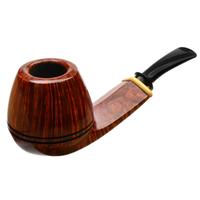 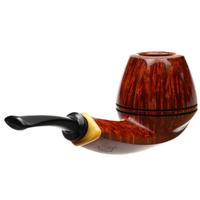 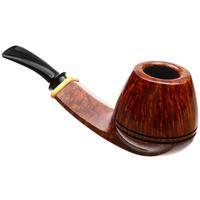 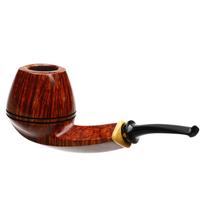