Every pipe that Kurt Balleby fashions is an exceptional feat of craftsmanship and artistry, but among the Danish carver's portfolio, his Bulldog and Rhodesian renditions remain most iconic and prolific. He also defines the forms slightly differently than most: Instead of differentiating the Bulldog and Rhodesian based on their shanks — diamond versus round — Balleby alters the position of the bowl's beadlines. For his Bulldogs, he poises the grooves near the base, just above the transition to accentuate the rim's upward taper; whereas, his Rhodesians present the form's more traditionally higher set beadlines.

Though these Bulldogs and Rhodesians comprises a considerable percentage of Balleby's work, straight renditions are significantly rare, making this particular Rhodesian even more of a collectible gem. The bowl maintains Balleby's typically plump and rounded shaping style, but the diamond shank extends to added length for impressive line work and a cleanness that highlights the Danish artisan's skill. Straight lines on pipes are aesthetically simple, but they're unforgiving of errors — any interruption or fault in the line is readily apparent, even more so when incorporating panels. This Rhodesian's shank, however, is a lesson in clean beauty. It delights with trim facets at the flanks and a diamond cross section overall, and it's paired to an abbreviated saddle stem for Lovat-like posture but with a Rhodesian bowl. As expected from Balleby, the finish's rich, chestnut contrast stain showcases a stunning array of grain, following the composition's line's beautifully for a cohesively gorgeous design matches by preeminent craftsmanship. 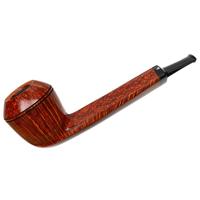 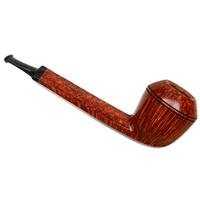 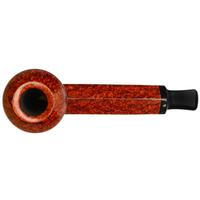 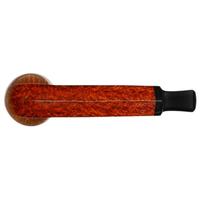 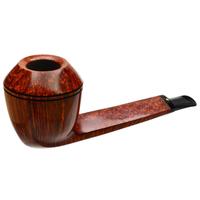 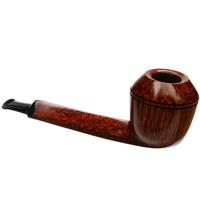 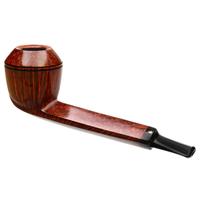