Even if you're unfamiliar with the name Bo Nordh, you're likely familiar with his work. The Swedish artisan was considered among Sixten Ivarsson's four students, joined by Jess Chonowitsch, Jørn Micke, and Sixten's son Lars, and during his artisan pipe-making career Nordh developed some of the most iconic and recognizable freehand pipe shapes. Designs like the Elephant's Foot, the Ballerina, and the Ramses have become staples across the artisan pipe-making world, with many current carvers honoring Bo with their own renditions of his pioneering forms. Besides the Elephant's Foot, the Nautilus is among his most recognizable and popular designs, and this version from Kurt Balleby beautifully exemplifies the naturalistic shape.

The exact proportions and details of a pipe shape can vary across iterations, affording carvers a certain degree of creative freedom: Two versions of the classic straight Billiard can have different shank lengths and bowl heights, different degrees of cant and taper, different stem styles, etc. With the Nautilus and other similarly Freehand designs, those creative liberties are broadened even more. At its root, the Nautilus is defined by a conical bowl with a shank that curls back on itself — reminiscent of the design's namesake sea shell — yet even that aspect enjoys a wide range of renderings. Some carvers evoke the motif through carved ridgelines and channels while others, like Balleby here, define that curling shank via a hole at the topside; still other artisans have opted for wildly creative iterations, such as those that feature the curling aspect at the front of the bowl rather than the shank.

The Nautilus is a non-standard design, but this Balleby rendition caters to its most oft-seen rendering. The shank and the bowl are barely differentiated, with the former flaring gradually and gently from the latter — much like the Horn shape and its indiscernible transition. The shank, then, curls back toward the bowl and connects to the topside like a cresting wave creating a hollow cylinder as it rounds over itself. Balleby has accentuated that feature with hard ridgelines that frame the shank's curling nature and further the form's shell-inspired shaping. In contrast, the bowl's lines remains smooth and seamless as the rise, forward-urging toward the rim, which is concave — shaped to perfectly mirror the shank's undercurve in profile and balance the composition. Stunning grain delights under a rich, auburn contrast stain, and the Nautilus shape captures this briar block's grain wonderfully, with cross grain defining the middle and birdseye bespeckling the flanks. 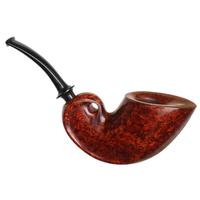 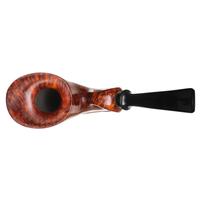 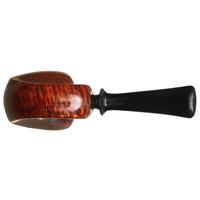 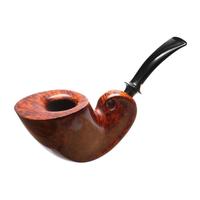 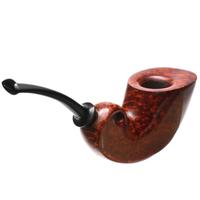 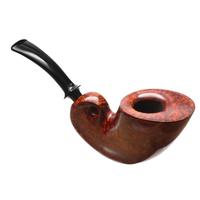 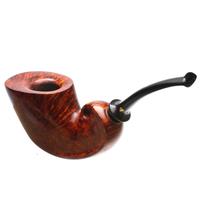