Kurt Balleby is a man who is absolutely dedicated to quality and perfection, something that is reflected in every pipe he crafts, as each one is required to pass through 150 individual steps in order to meet his standards. The result of this is, not only pipes which are undoubtedly superlative, but an extremely low annual production rate. He also lays claim to a number of signature renditions, with one of his most recognized being his take on the bent Bulldog, distinguished by low-set beadlines. As a Rhodesian, which he defines by its higher-set beadlines, this pipe is one of the few that we've seen from Kurt, with the aforementioned Bulldogs being far more well represented in his portfolio, making this pipe quite the rarity for enthusiasts of the Danish artisan's work.

There's a feature present in many Balleby pipes that I quite enjoy, but I don't know exactly what to call it, so I will refer to it as cradling. This results when a usually cheeked transition is paired to a dipped, extended shank that, rather than lengthening out back, instead ebbs forward to the bowl. Not only this, but it is typified by a clear separation of shank and bowl, with the bottom of the shank being defined against the heel and underside of the bowl, giving the visual effect of the bowl itself being "cradled" by the shank. I've seen this effect in a good few artisan's works, but Balleby has elevated it here through a pair of ridgelines at each flank of the shank whose lower pair can be followed as they curl up from the underside and reach into the fore wall. Dual beadlines adorn the high-set waistline of the bowl, followed by a swift taper to the rim that draws the eye toward its inward slope quite well, the walls possessed of ample curves that promise a comfortable feel in hand.

A trim saddle stem curves subtly out of the shank end, the latter of which is adorned with an accent of boxwood that Balleby has expertly shaped to correspond to the shank end's own outline. A deep, dark sandblast dresses the briar here, with the majority of the tapering shank receiving a smooth finish, revealing some lovely birdseye in contrast to the textural growth rings that quaver across the rest of the stummel, and especially the bowl. The aforementioned boxwood adornment provides a welcome color contrast to the palette here, with its pale hues standing out starkly amongst the more midnight coloration of the stummel and stem. 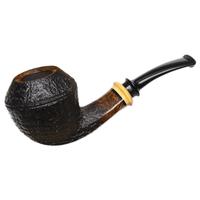 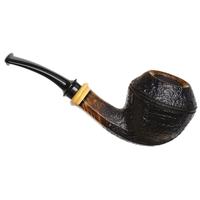 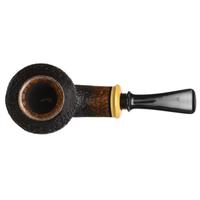 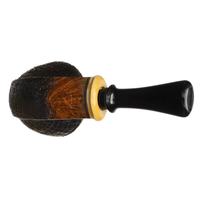 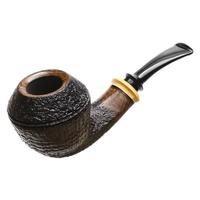 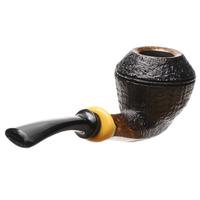