Becker pipes was started in 1970 by Fritz Becker, an Austrian who emigrated to Italy following the looming threat of German invasion in 1938. Soon after its establishment, Becker pipes became a family affair, as Fritz was joined by his son Paolo, the two proceeding to work on crafting novel shapes and enhancing the functionality of their work. What had started as more of a family hobby then evolved into full-scale production, and the artisan workshop was founded properly, under the name Becker, in 1979. Though both Paolo and Fritz have since passed away, the unique shaping and high standards of quality associated with the name have been maintained by Paolo's son Federico Becker, presenting us with pipes such as this straight Apple.

One of the most immediately recognizable elements of many Becker pipes is the heel, something that, in many cases, presents with a sharp angularity that pushes forward further than is normally seen from other carvers. This feature is present here, and its defined, spur-like outline supports a plump bowl that takes on a supple flare to a high-set waistline. This high waist is also something that's often seen in Becker pipes, as it places further emphasis on the heel and, in this case, imbues the pipe with a consistent roundness through the flare. Through the flanks of the bowl we can see this flare quite prominently, with the aforementioned consistency allowing for even expansion on all sides. A gentle taper takes hold as the walls of the bowl near the rim, something that's a bit more pronounced at the fore, and the rim itself then slopes sharply into the chamber for easy loading of tobacco. Draping a thumb is easy and natural here, thanks to the wide transition, and from here we see the shank ebb toward the cumberland stem in a sleek taper that remains consistent throughout the combination. Made from strawberry wood and dressed in a dark, inky sandblast, this pipe showcases some lovely grain, and its darker hues are nicely contrasted by a trio of boxwood accents at the shank end and stem base that become paler as they reach toward the stem. 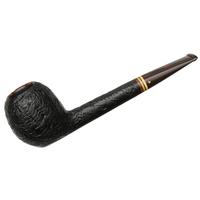 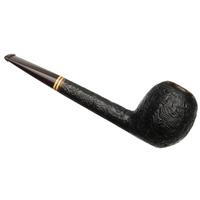 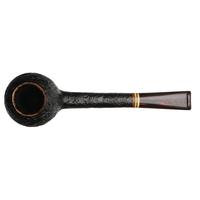 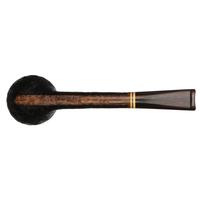 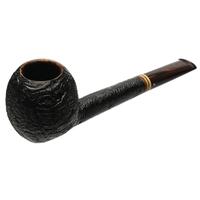 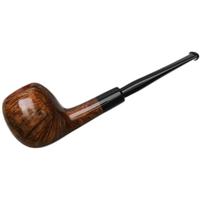 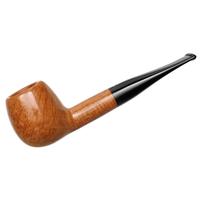 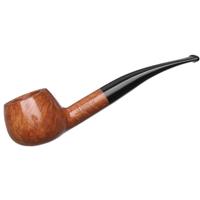