Benni Jørgensen's career in pipe making began after he injured his back in 1980, forcing him to retire from house building. After finding an interest in pipes thanks to his doctor, he started to make some of his own, leading to a chance encounter with his neighbor, Teddy Knudsen, after needing to buy some briar. Knudsen urged Jørgensen to apply for a position as a pipe maker with W.Ø. Larsen, one which he got, and launched him into a 20-year career during which he spent the majority of that time carving the workshop's finest pieces. In 2005 Larsen closed down, and Jørgensen began to carve pipes under his own name, developing a shaping style that is utterly singular and unique to him: The fruits of over 35 years of pipe making experience. Said style exists at the confluence of structure and softness, pairing elements of rigidity with sweeping curvature in a way that allows them each to emphasize each other, all while keeping the flow of the lines and silhouette of the shape extremely organic. Such is the case with this bent Apple, a rendition of the shape unlike any I have seen before, with the exception of a small handful of Benni's past work.

The first thing that leaps out at me when I see this piece is the bowl, and, though that may be the usual case with pipes, this one pushes outward more, as if it were separate from the shank though still held aloft by it. The reason for this rests not simply on the shoulders, or should I say waist, of the bowl, despite how wide the waistline is and how far it overhangs the shank. Rather, the entirety of the composition works to visually urge the bowl onward, with the shank's build both lifting it upward, cradling it at the underside, and framing its waistline with a pair of ridgelines that run from either flank of the shank end to the heel. The transition works in concert with the shank by way of its deep cheeking, creating a cleft around the lower bowl's circumference and adding further visual separation, as if it were a large fruit on the branch of an offering tree. A slightly offset concave nature sets into the rim, pushing the aft side up a bit more than the fore, while, on the other side, the lenticular shank end forms an arc from point to point, the trim, gently downturned stem nestling into it at the base before gently flaring to an expansion ring. The entirety of the briar has been finished with a glossy mahogany stain, revealing flame-grain structure surrounding the bowl and following the flow of the curved shank as it leads to it, leaving the underside awash in dense, heavily populated birdseye. 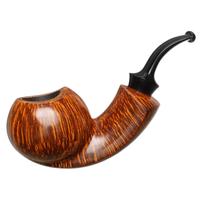 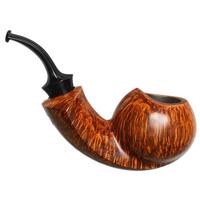 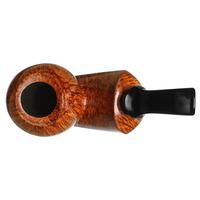 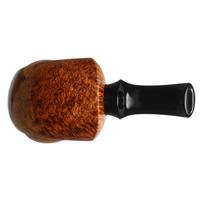 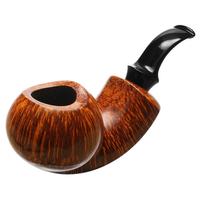 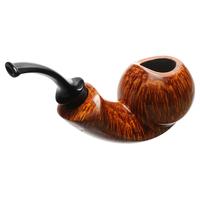 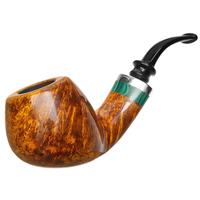 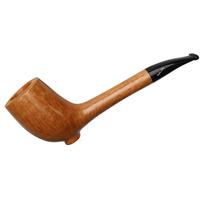