Born in 1955, Benni Jørgensen was originally a carpenter, though he injured his back in 1980 and was advised against returning. During a routine visit with his doctor, Jørgensen was introduced to pipe making, found an interest in it, and took it up, learning that Teddy Knudsen was his neighbor. Eventually, after being impressed with their offerings at their showroom in Copenhagen and with urging from Knudsen, Jørgensen applied at W.Ø. Larsen, beginning a career that would span 25 years, until the Danish firm closed its doors in 2005. Of course, this did not stop Benni from carving, quite the opposite in fact, as the knowledge acquired from decades of carving the workshop's high-grade pipes gave him an intimate understanding what goes into making a great pipe, as well as insight into his own personal shaping style, a style that can be clearly seen in this Tomato.

The shaping of the body of this pipe has become something of a signature for Jørgensen, with its tightly-knit build and deep, sweeping curvature. In general, the Tomato itself is something of a rarity from the artisan, making this piece a welcome addition to his portfolio. Something that Benni does incredibly well is to eke all of the softness out of his shapes, making it so that the hard briar burl appears as pillowy as possible to the eye, with the touch itself not being too far off either, thanks to his mastery of curvature. This piece is no exception, excelling in this respect by virtue of the squat, plump nature of its namesake's bowl, the low-set waistline raised into prominence by way of the dramatically lifted heel.

At the shank end we see a semi-lenticular shape, with the flanks beginning a pair of ridgelines and the top side given a bit more inflation, almost coming to a point like that of a Reuleaux triangle, informing the shape of the shank for its entire travel, which arcs down steeply into the transition, meeting the bowl with strong cheeking. What gives said bowl such a defined lift occurs at the underside of the shank, as the flanks and underside continue beneath the bowl, rising up at its fore before dissipating and actually curving into the waistline of the bowl itself, a beautiful detail. The effect of this is what I like to call cradling, with the extended shank acting as a giving branch or hand, gesturing toward you with the bulb of the bowl, making the composition both more floral and organic at once. A stunning contrast stain dresses the briar here, with chestnut streaks of vivid flame grain standing out against a mahogany base and birdseye swirling in droves both on top and beneath. 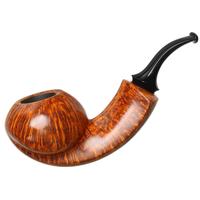 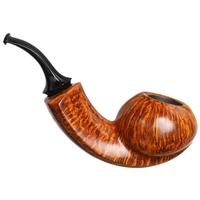 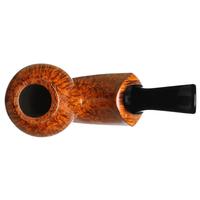 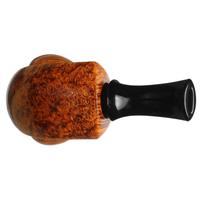 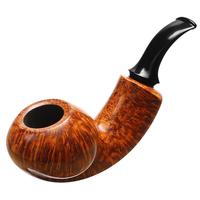 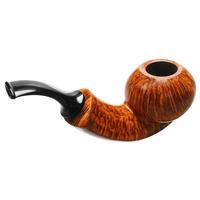 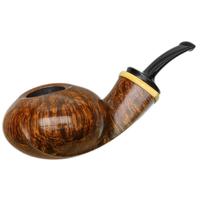 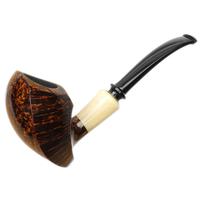 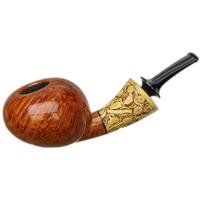