Hearkening to classic pipe design from the mid-20th century, Brebbia's Serie '1960' line is an homage to traditional shape-chart standards. Unlike many of the Italian marque's other offerings, these pipes are non-filtered and forgo the flourishes often seen across many Italian pipes. Instead, Brebbia's Serie '1960' pipes are tried-and-true classics, exemplifying the reserved, stoic, and elegant style that characterized early French and English pipes — perfect for aficionados of timeless shape-chart standards. This particular example bears the black sandblast of the eponymous Nera Sabbiata finish, contrasted by a smooth ring of virgin briar along the stem base for tasteful contrast, and it's presented across the marque's "623" shape: a squat bent Bulldog marked by crisp lines and a sleek saddle stem. 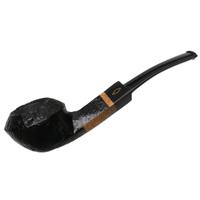 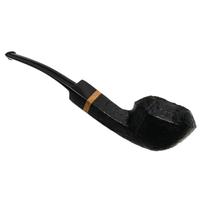