Castello's Old America series is a very special one which was originally produced in 2020 as a limited run of 18 oversized Hawkbills in a variety of finishes. These pipes were released in lieu of their annual special edition for the PCA, formerly IPCPR, trade show in Las Vegas, as the onset and subsequent spread of COVID-19 made person to person contact impossible. For 2021, Castello is continuing the tradition, with the shape changing to a, likewise oversized, bent Billiard and production increased to a total of 20 pipes, of which this example is number 12.

A length of willowy indigo acrylic makes up the stem of this eight inch long pipe, contributing quite a bit to its length and striking a dramatic posture due to its pairing with an abbreviated, sharply angled shank. The transition here is quite tight, and the build to the rim swift, the underside given a more languid, gradual curvature from button to rim, though the heel's swift upturn hastens this toward the fore. The bowl standing on this heel is nearly three inches tall, rising high and proud, balanced on the end of its lithe shank and stem, and features a rim crowned with craggy plateau overlooking a deep, broad chamber. The overall silhouette of this pipe reminds me very much of a stylized check-mark, though this pipe carries every bit of its visual weight in the bowl as opposed to a check's even distribution. Dressed in the Old Antiquari sandblast, this piece features a smooth shank for both color and texture contrast, the bowl receiving the inky blast and showcasing stunning ring grain, while the shank is a warm mahogany, making for a striking palette. 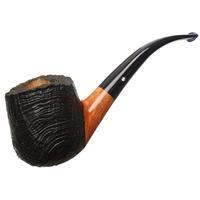 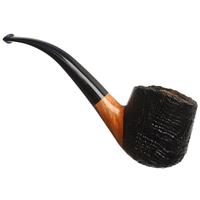 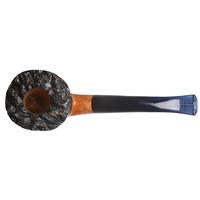 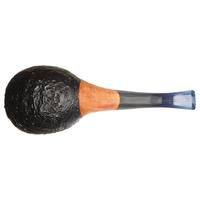 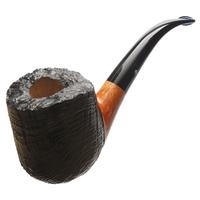 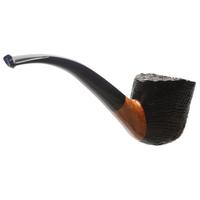