While Claudio Cavicchi's portfolio is composed primarily of Italian neoclassic renditions, he's also known to throw in the occasional, Scandinavian-inspired piece, from the iconic Horn design to this Elephant's Foot (both shape's originating from Swedish carver Bo Nordh). Flanked by crisp ridgelines, the fore of this piece bulges plumply, resting firmly in the palm, while the heel tapers toward the pointed heel in profile. Though the shape is rooted in the Danish tradition, Cavicchi has rendered it here in his conventional Italian proportions, offering up loads of chamber depth and sturdy, insulating walls surrounding. Also typical of Claudio's work, this CCC-graded piece is a grain-lover's dream — the flanks display vivid cross grain patterns, and the fore is a storm of birdseye. Accented with a flaring piece of boxwood at the shank end, the ferrule's lighter tones complement the stummel's honey-blonde stain. 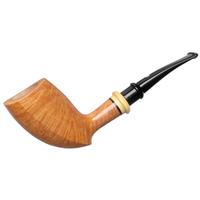 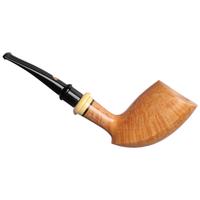 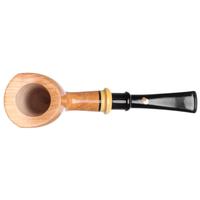 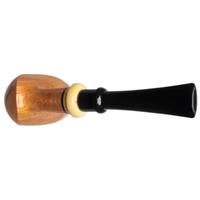 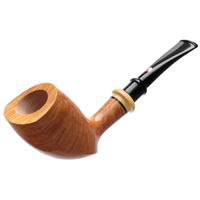