While Jess Chonowitsch is rightly admired for his many magnificently rendered shapes, such as his Mushrooms, his Brandies, Scoops, Fishes, and Sailors, it is his Billiard shape and its derivations that have always most impressed me. That may be because those are my personal favorite shapes, and I pay particularly close attention to them, while I know that anyone who examines any Jess composition closely is going to be impressed. However, Billiards are the most classic of shapes, and it takes great skill to make one, let alone an example with its own distinct personality recognizable as the work of an individual pipe maker. A Jess Billiard, however, is always easily identifiable.

I think it's a matter of proportion, line, and curvature. Jess's precision is phenomenal, his curves smoothly sinuous, his sense of proportion unsurpassed. The bowl of the Billiard featured here, for example, displays the firm heel that he is famous for, depending downward from the diminutive shank with the subtlest of arcs and introducing the gently tapered bowl rising above it. The angles for the bowl of a Billiard vary, but Jess always strikes that "sweet spot" that resonates so with enthusiasts. Here the waistline is low, bringing the pipe's visual center of gravity toward its base, with slightly less curvature on the shank side than on the far flank, imbuing it with an almost subliminal impression of forward cant.

The rim is signature work from Jess, smooth, gently inflated, and rounded to perfection, and visually accentuated by its ruby-esque hue contrasting with the dark stain of the stummel. Additional contrast is offered by the pale shank comprised of three knuckles of bamboo, each node on that shank domed with a resin-like seal. From the end of that shank, a flared expansion of the stem base provides a bit more visual weight than would otherwise exist before concisely descending to the flat saddle mouthpiece, at the end of which is Jess's lip button, which is carefully slotted through meticulous work to provide flavorful airflow at what is arguably the most important element of a pipe. Jess takes great care to ensure that his pipes are first and foremost efficient smoking instruments, and secondly works of beautiful craftsmanship. This Billiard is of course both, and rendered as only Jess Chonowitsch can. 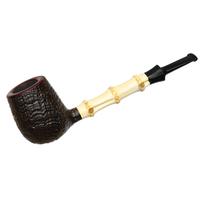 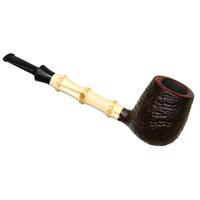 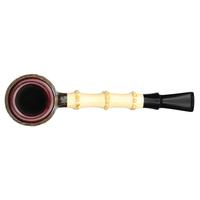 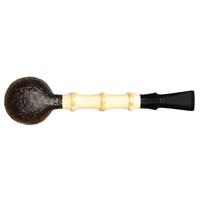 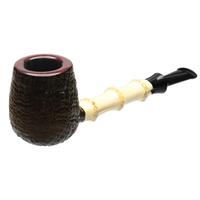 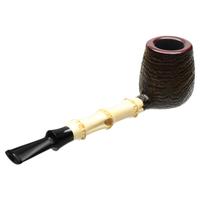 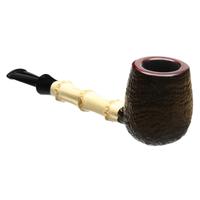 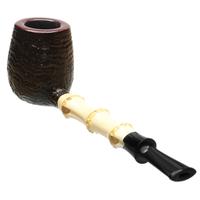