The Danes are considered the progenitors of artisan pipe making, and among them, Sixten Ivarsson is considered the pioneering force, the founding father of the movement. His influence, however, has spanned generations and continents in the decades since, and his four direct students — Jess Chonowitsch, Jørn Micke, Bo Nordh, and Sixten's son Lars — have both elevated Danish artisan pipe making and reinforced Sixten's legacy. Today, Jess remains the only surviving member of that ensemble, and he's widely regarded as among the best pipe makers in history. His style is one marked by refinement and seeming simplicity; he often avoids ostentation, instead focusing on classic, timeless shapes and rendering them as perfect as humanly possible. This Fish rendition counts among his signature designs, and it testifies to the Danish artisan's shaping and engineering acumen, with seamless curves, proportional balance, deft stem work, and gorgeous grain definition.

The Fish shape has become synonymous with Danish artisan pipe making, with Lars Ivarsson and Jess most notably known for championing the design. Not to be confused with the Blowfish, this Danish-style Fish is most often characterized by a rounded, Egg-like bowl and teardrop shank. Lars often fashioned versions that accentuated this teardrop feature by elongating the shank, but Jess' versions are typically more compact and balanced between the bowl height and shank length.

This particular rendition from the revered carver delights with supple curves and consistent lines that all balance and cohere to one another. The bowl's forward-urging posture aligns with the grains angled trajectory, and the shank curves upward to the same degree that the grain runs. Such shaping lends the impression that this specific block of briar was meant to be this specific shape, and Jess has followed the natural grain patterns expertly to that effect. Fittingly, the saddle stem turns downward to match the shank's curvature, adding balance and harmony to the profile in a way the incorporates the stem into the final composition. As is characteristic of this shape, the teardrop shank bears a singular ridgeline the contrasts the form's supple curves with a dose of accenting rigidity. In this piece, it traverses the left flank before sweeping up the bowl and gradually dissipating into the surrounding flame grain, and in profile it creates a beautifully consistent undercurve that acts as the pipe's foundation. Superlative engineering combines with artful shaping in this tour de force, making for a stunning example of one of the world's greatest pipe maker's most iconic designs. 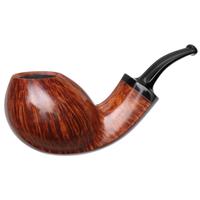 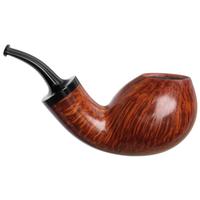 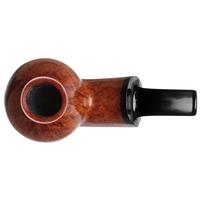 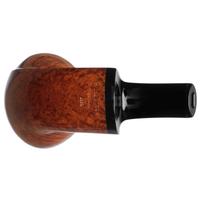 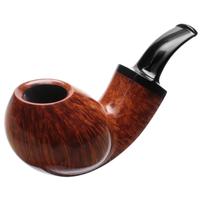 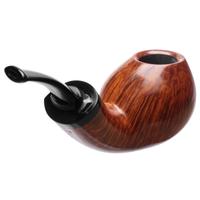 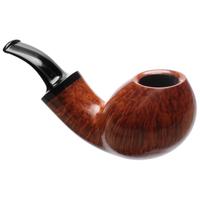 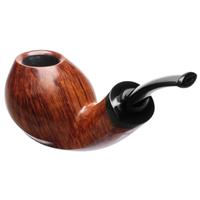