You won't see the Fish shape on classic English and French pipe charts, but within the milieu of Danish artisan pipe making, its among the most iconic and recognizable forms. The shape was pioneered by Jess Chonowitsch and Lars Ivarsson, each developing their own signature renditions but defined by similar elements; namely, a bulbous, rounded bowl and a shank that displays a teardrop cross section. Lars often favored elongated versions that accentuated the shank's outward flare and ridgelined presence, but Jess' signature catered toward more curvaceous and compact iterations. Numerous carvers have since honored Jess and Lars with their own interpretations of the Fish, but this piece from Jess represents the original.

Because its characteristic aspects are rather broad, the Fish lends itself well to myriad specific renditions with varying bowl shapes and with the shank's defining ridgeline terminating in different places. As such, Jess' variations differ in bowl height and breadth, but all are typically marked by a stouter, Brandy-like Egg shape that urges forward to continue the momentum implied by the curling shank and stem. This example reveals that plump, muscular style, and while the bowl's fore curls back toward the rim, the aft side's forward angle informs the profile dynamism.

The shank maintains the bowl's robustness and curls upward in abbreviated length before being balanced by the hand-cut vulcanite stem's recurve. Teardrop of cross section, as the shape demands, the shank features a crisp ridgeline along the left side, and in profile, this firm edge provides a gently arcing foundation upon which the rest of the composition stands. Its structural motif contrasts the majority of the stummel's soft curvature, but the ridgeline gently dissipates halfway up the bowl, blending seamlessly with the flame grain as the rising tendrils continue the ridge's upward trajectory. Dressed in a rich, auburn stain, the grain orientation on this piece is paramount, and it's further distinguished by the shank face — delineated by a slight bevel and stained a lighter hue for an accenting touch without the need for alternative material. 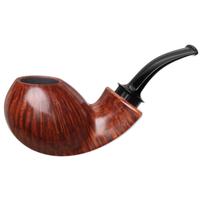 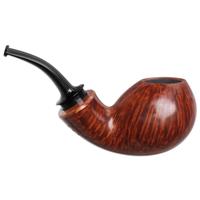 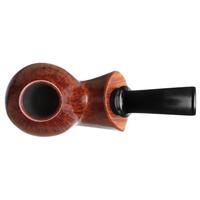 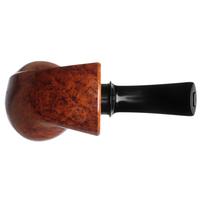 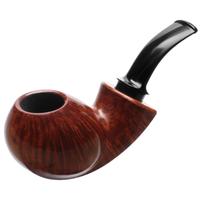 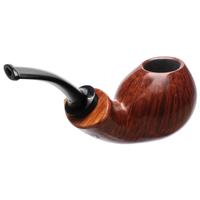 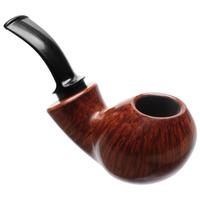 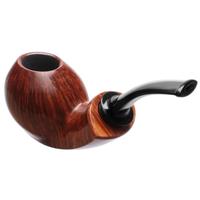