Though a number of dark-stained, silver-accented artisan renditions of English shape chart standards comprise much of Chris Asteriou's portfolio, the Greek carver is also quite fond of and known for more organically-inclined numbers — the Acorn (and its Pear and Strawberry variants) having become rather synonymous with his work. One such piece is offered here, beautifully sinuous and imbued with Asteriou's conventional style.

Leaning very much into the Danish school's aesthetic, this Acorn is marked by a high-waisted bowl, the fore-most line sweeping upward from the conventional heel spur. Though the shape requires a pointed underside, it's a common feature of Chris's work, making for quite a striking, angular profile to echo the crisply tucked transition above. Oriented more aft, rather than directly under the bowl, the protruding heel urges the bowl forward, the potential energy of the deeply bent shank and stem realized through the bowl's fore. The supple curves throughout and the dark-stained ring of plateau at the rim hint at this piece's Danish inclination, while Asteriou has added his own whimsical dose of asymmetry at the shank: the tight-knit, concise knuckles of bamboo sweep into the briar, whose vertical axis has been tilted slightly at an angle to align with the bamboo's twisted nature. Boasting a gorgeous contrast stain and a steel tenon, this pipe exudes an elegant and vivid color palette all fashioned with Chris's expert craftsmanship and keen eye for detail. 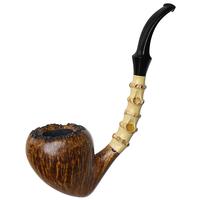 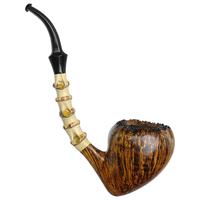 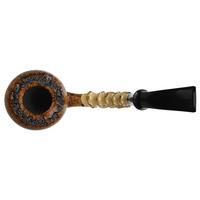 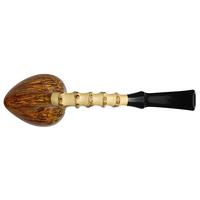 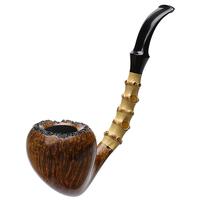 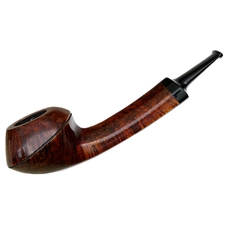 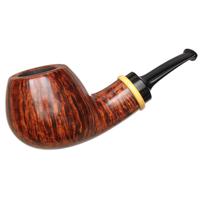 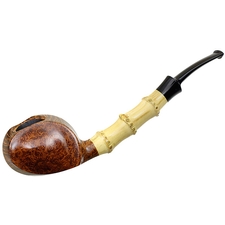