Chris Asteriou's affinity for organic designs is readily apparent throughout his portfolio, with his signature Strawberry and Acorn renditions being the most notable examples. This bent Egg continues the Greek artisan's penchant for organically inspired shapes, presenting a design that displays a highly gestural stance and offers hearty, yet balanced proportions throughout. A noticeable amount of bulbous curve is present at the bowl's aft, further accentuating the shape's gestural disposition. In contrast, the bowl's fore slopes downturn to the sweeping heel, that curve continuing into the shank-and-stem combination. The slightly tucked transition further emphasizes the bowl's curvaceousness before leading to the flaring shank and gracefully downturned stem.

While the shaping is certainly impressive, I'm most struck by how Chris has used the shaping to help inform the overall grain orientation of the composition. Streaks of cross grain grace the flanks, framing birdseye along the fore and aft while the gorgeous contrast stain makes the grain even more vivid. Particularly notable about this piece is the tagua nut accent adorning the shank end, marking the first time we've seen Asteriou use it on one of his pieces. The material often displays a creamy hue dotted with dark spots, not unlike poppy seed salad dressing and comes from a species of palm tree predominantly found in northern regions of South America. The tree's scientific name is Phytelephas, which literally means "plant elephant" because of the seeds' resemblance to elephant ivory. The piece of tagua nut Chris used on this piece displays a pale, smooth, creamy hue, offering just the right amount of contrast against the rest of the composition's color palette. 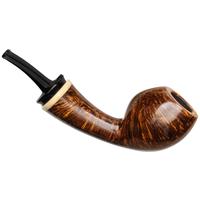 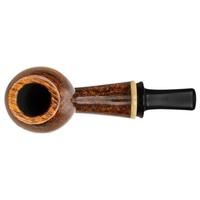 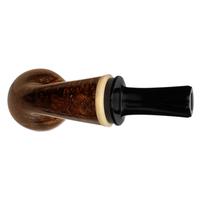 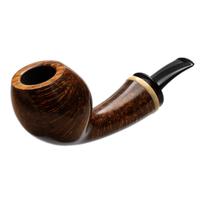 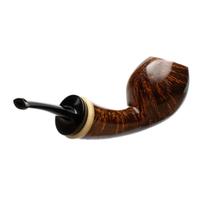