Chris Asteriou's stylistic range varies dramatically — from textbook renditions of English classics, to more Danish-inclined forms, to evocative Freehands — yet the Greek carver maintains a consistent authenticity throughout his work. Regardless of a particular piece's aesthetic influence, it remains true to that inspiration's essence. For example, Chris is particularly fond of vintage English pipes, and he's fashioned a number of designs inspired by old-school Dunhill, Comoy's, and BBB pipes. These iterations are elevated by Chris' engineering prowess, but he brings these vintage designs to life as they would've existed a century ago, seemingly having been plucked directly from a 1920s pipe catalog.

Simultaneously, his more sculptural, Freehand designs also reveal a commitment to the pipe's artistic composition, the lines flowing harmoniously despite their complexity and the shaping maximizing the briar's natural grain patterns. It's through this dedication to each pipe's individual design that Chris maintains consistency across his portfolio, even across wildly different individual shapes. Likewise, his experience as an architect provides a unique artistic lens that informs his design style, and his engineering proficiency ensures the highest degree of craftsmanship across his work, from internal smoking properties to stunning accents of silver, horn, bamboo, or other tasteful accoutrements.

This bent Egg has earned Asteriou's prestigious Narcissus grade, representing the highest echelon of his work to date and revealing a superlative marriage of briar's naturally occurring beauty and the work of human hands. As a shape, the bowl reveals well its egg-like nature, but the form's complexity and artistry is best revealed across the shank, which Chris has shaped with an array of panels and ridgelines that offer intriguing asymmetry and visual fascination. Said facets and ridgelines all conjoin and terminate at the pipe's heel, sprouting a crisp spur in profile. Such a design cue is something Chris features often in his work, particularly his more organic, Freehand designs, and featuring it here acts as the maker's signature of sorts. In profile, the shank curls upward into an oval-like face, almost curling back toward the bowl. The flanks feature crisp panels, yet while the left's remains consistently trim, the right's expands dramatically as it reaches toward the heel. Such shaping offsets the axis of the shank face, tilting its oval form downward and to the left — in turn matching the bowl's slightly more rounded left side.

This slightly oblong, asymmetrical bowl shaping prioritizes the preservation of the briar's grain pattern, here shaped to promote cross grain and birdseye. Similar to a Blowfish's characteristic orientation, this piece features a central band of cross grain that wraps the bowl and even follows the tilted nature of the oval shank face, further bespeaking Chris' consideration of the grain while carving. Meanwhile, swaths of birdseye canvas the flanks of both bowl and shank, revealing dizzying swirls and endless intrigue. With such natural beauty revealed in the briar, Chris forwent staining the stummel, instead opting only to apply oil and wax for a gorgeous, natural palette that will darken gradually as this pipe is smoked. Fitting the bright color palette is an accent of sterling silver adorning the stem base. Chris often impresses with his silverworking acumen, and this example is no exception: the silver band having been neatly scalloped and pointed to align with the vulcanite's subtle curves and ridgelines. 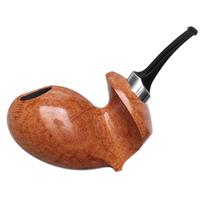 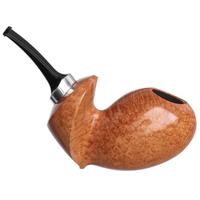 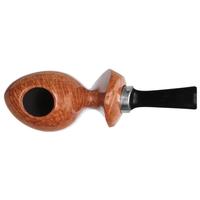 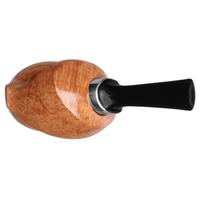 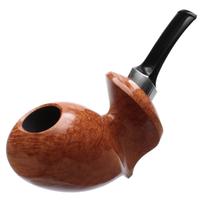 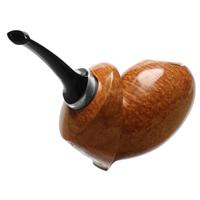