Chris Asteriou has quite a unique approach to design, something undoubtedly informed by his formal education as an architect, his following career in that field, and his experience in industrial design. As an autodidact, Chris faced quite a few challenges in becoming the renowned artisan he is, though lacked nothing in the way of inspiration, beginning his craft with a great admiration for classic Anglo-French marques and the tradition of Old World pipe design. As he continued, however, his awareness of the Danish and Japanese schools grew, and as did his fascination with them, leading to pieces with more implied momentum, more softness, and more organicism about their builds. This straight Dublin in particular takes direct inspiration from one of the the most highly-regarded Japanese artisan pipe makers ever to live: Kei-ichi Gotoh.

Even at first glance, this strikes one as an homage to the Japanese master's work, with a defined sense of momentum and a keen grasp on the subtle lines that make his pipes so gripping. Personally, I find that there is a distinct similarity between this Dublin from Chris, and this one from Gotoh, especially in the construction of the shank end and face. The shank itself starts from the transition with a slow flare that gradually becomes faster as it approaches the end before expanding dramatically and terminating in a backwards-slanting ridgeline. From there we see a touch more travel, more so underneath than on top, and an understated taper before a second, domed ridge takes hold, pushing the shank face inward, similar to the Dublin in question, though with small alterations that keep it thoroughly Asteriou's. From out of this slight recess we see the straight stretch of saddle stem erupt, bringing with it a pronounced inertia, as if its hitting, and then embedding into, the shank face caused this recessed area.

This kind of developing momentum is reflected, too, in the bowl, as it takes on a defined forward cant from the transition, arcing upward to the rim from the aft, while the fore end remains rather straight in its flare skyward. Further evidence to this conclusion is present at the heel, as, in addition to its flat surface allowing this piece to sit, it gives insight to the "before" of the stem's impact, sitting not underneath the chamber, but rather beneath the aft side of the rim, as if this were the original orientation of the bowl: blooming straight up out of the heel. There's a powerful command of line here that allows Chris to achieve this, and its truly wonderful to behold, especially since he is able to do it with such an impactful fluidity of motion. Dressing this piece is a warm and vibrant chestnut contrast stain, highlighting dense striations of flame and straight grain along the flanks of the stummel and wrapping the bowl, following the contours of the shape wonderfully. On the bottom we see a basin of birdseye, while on top we are greeted with a wealth of the swirling grain, especially on the softly inflated surface of the rim, and this, as a final, enchanting detail, is softly kissed by plateau at the fore. 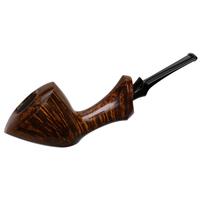 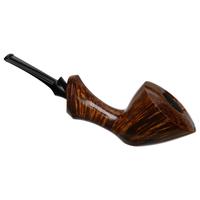 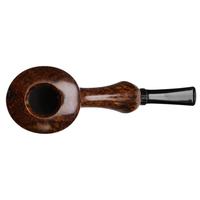 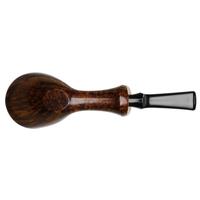 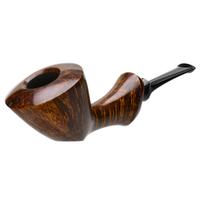 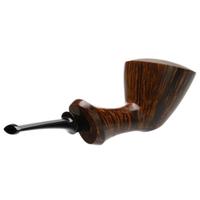 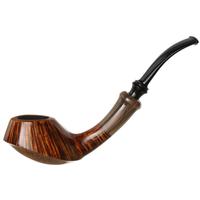 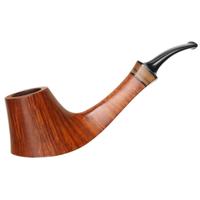 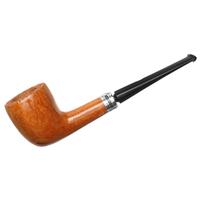 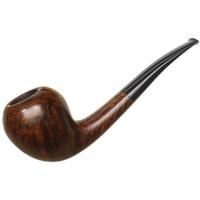