American artisan Clark Layton is perhaps best know for his Pear renditions, a shape incredibly well represented in his portfolio, standing in stark contrast to the Egg, a shape we have never seen from him before, making this Freehand rendering a special one, and not just for that reason. This Egg is simply singular, it is utterly unlike any other version of the shape that I have ever seen and, if I must say, even that our site has seen (at least that fits into the Freehand Egg niche). The stummel is visually divided vertically by a pinched transition, splitting the shank and bowl into distinct parts, with both following nearly the same implied line. The visual weight is almost evenly divided, though the bowl still maintains a heftier stature which is, however, offset by the stem, further lending this piece balance. The lines that make up this pipe are almost universally soft, especially on the bowl, whose asymmetrical, ovoid shape thrusts the aft of the rim forward, magnifying a momentum that is imbued in the piece. This softness is tempered by a firm ridgeline along the underside, solidifying the aforementioned implied line and adding some structure to the fluidity of the other components present, something that is texturally represented by a strip of plateau that runs up the fore of the bowl. The rim is chamfered, leaving a strip of briar smooth and mirroring the surface of the semi-oval shank face, both of which are stained a warm mahogany, a stark contrast to the deep, almost black, chestnut sandblast that dresses the rest of the stummel. The most enticing part of this sandblast is the growth rings it reveals and the way that they almost perfectly drape across the stummel, arcing with the shape as if they had been lain there, speaking to Layton's eye for design, and the palette is brightened by the stem, a multicolored brindled vulcanite that livens the piece and provides further balance to an already wonderfully executed piece. 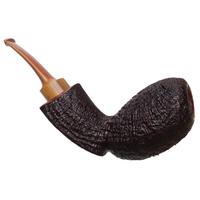 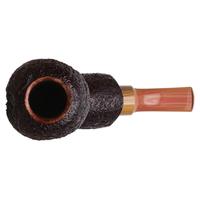 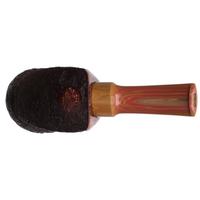