Notably pioneered by legendary artisan Jess Chonowitsch, the Mushroom design has continually been reinterpreted by countless carvers within modern pipe making. Cornelius Mänz presents his own distinct version here, noticeably using a stronger degree of asymmetry on this rendition compared to past examples. Previous pieces have been overtly organic or perfectly fused Danish and Japanese styles. Unlike those aforementioned examples, this particular piece is free of any accenting materials or adornments, allowing the shaping and stellar grain to remain the focal point.

A crisp ridgeline emerges from the bottom of the shank face, traveling along the underside before dissolving seamlessly into the bowl's lifted heel. The ridgeline that encircles the inflated rim informs the bowl's asymmetry, the left side sloping downward while the right side protrudes outward, seemingly suspended in mid-air. Like many aspects of the German artisan's work, the asymmetry can't be fully appreciated until it's examined from the smoker's perspective. And with all the gorgeous grain on display, this is a pipe that begs to be studied. Birdseye dominates the rim and heel, while streaks of grain explode along the flanks and under the rim's ridgeline, all perfectly illuminated by one of Cornelius' vibrant contrast stains. The bulging shank face matches the rim's shaping and is reinforced with a brass inset ring for a mount-style tenon configuration. Spectacular work from Mänz that showcases his deft ability to approach a shape differently each time he crafts it. 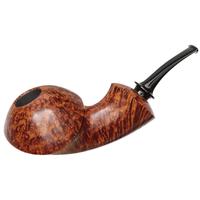 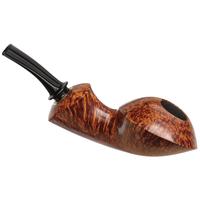 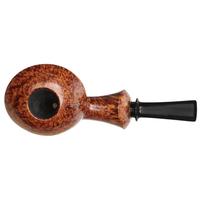 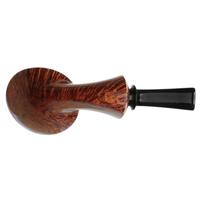 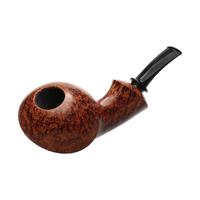 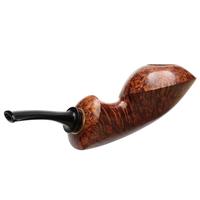 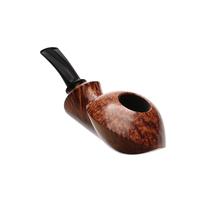 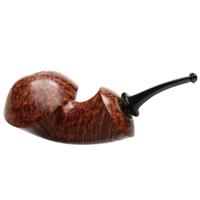