Though Cornelius Mänz deeply appreciates shape chart standards and is heavily influenced by legendary Danish artisans Jess Chonowitsch as well as Ulf Noltensmeier and Per Hansen of S. Bang, Cornelius gravitates toward Freehand forms. The German carver often utilizes asymmetry in his work, reflecting his belief that nature is naturally imperfect and adhering to Sixten Ivarsson's groundbreaking "shape first, drill second" approach to artisan pipe making which allowed carvers to shape according to the briar's grain instead of being restrained by where the holes were drilled prior to shaping. This Billiard is a dramatic departure from Cornelius' organic shapes and asymmetric designs, presenting a piece that's thoroughly classic and rooted in the Danish pipe making tradition, especially the work of the legendary Jess Chonowitsch.

What struck me immediately about this Billiard was how it's simultaneously rife with supple curves and graceful line work, while also being quite muscular and robust. The bowl displays a bit of extra plumpness around its low-set waistline, subtly tapering up toward the ever-so-gently rounded rim and displays some slight cheeking around the transition — all elements that adhere to traditional Danish shaping cues. The shank end is fitted with a mount of creamy horn, an accenting material that's a signature within Danish pipe making and expertly used here by Mänz, having been sourced from old stock the German carver acquired in France. The mount subtly tapers, seamlessly leading to the tapered mouthpiece — both components suiting the composition exceptionally well. Such treatment of the shank end also echoes the bowl's taper while also keeping the profile clean-lined. Not only does this Billiard showcase Cornelius' more traditional side, it aptly demonstrates why his work is highly sought-after. 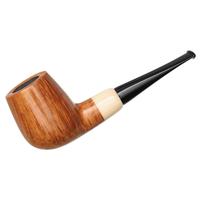 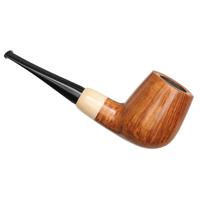 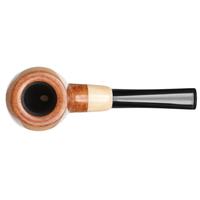 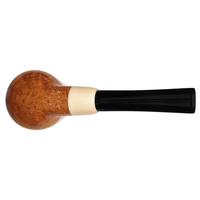 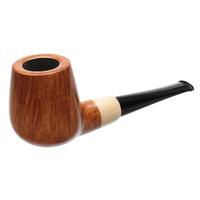 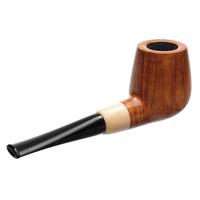 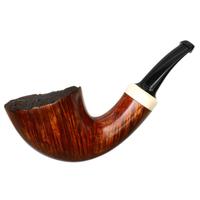