Originally a set designer for live theater, David Huber's obsession with pipes and the art of pipe making was awakened in 2006 with the purchase of his first one, and, in the years that followed, his subsequent study of the various schools of pipe design, especially the Danish and Japanese. In 2010 he ordered a pair of briar blocks and preform stems, intent on carving his own pieces: two years later he finished the first one and his obsession with the art form was solidified. Around a year later he quit his job and began carving full time, going on to win several awards for his work, including winning the pipe carving contest at the Kansas City Pipe Show in 2013, the first year of his full time work. Huber's style draws from a number of influences, and his study under artisans such as Nanna Ivarsson, Tom Eltang, and Jeff Gracik certainly contributes to this, but this Gemini in particular reminds me immediately of the work of both Alex Florov and Hiroyuki Tokutomi.

Now, the Gemini shape itself is one we've never seen from Huber before, nor any other artisan, at least given this name, and strikes me as a highly modified imagining of the bent Dublin. Of course, this pipe is much more than that, imbued with a sense of stylistic and compositional balance that keeps the eye fastened to it without fail. The stem here is a lithe, aerially-inclined length of tapering cumberland that ebbs its way out of an expansive boxwood fitment which nestles into a recess at the shank face. Before I get into the finer details of this piece, however, it is important to understand that Gemini, as a horoscope, is representative of the great twins, Castor and Pollux, with the name of the sign itself actually being the Latin word for twins. This is important because every element of this pipe is visually mirrored on either side from the transition, down to the way that the upturn and flare of the bowl mirror that of the shank. At the shank face we see a teardrop shape which seems to have fallen at a diagonal angle, the pointed end favoring the left flank, with its shape replicated by the boxwood accent of the stem. Not only this, but said accent actually follows the natural undulations of the plateau-laden face, something I didn't notice until I more closely examined this piece, a bit of detail that speaks to the painstaking effort that Huber has taken to match the facets of this pipe.

From the pointed end of the shank's teardrop shape there starts a plunging ridgeline that runs through the transition and into the bowl, dissipating just below the rim, its stature, travel, and point of dissolution mirrored on the right from the bowl's own teardrop apex. The transition itself is a tightly-knit parabola, dipping in and pinching the shank before the bowl erupts upward and forward from it, the momentum from this balanced by the posture of the shank, with the slightly heartier build of the bowl offset via the boxwood stem adornment. The result of this is a visual weight which sits happily at the basin of the transition, aided by the negative space which it offers, allowing one to better see the way which Huber has matched both sides of this pipe. Appropriately, the rim is crowned with plateau as well, matching the shank face, and the entirety of the stummel is treated with a crisp sandblast, creating a lovely feel in the hand and unveiling some beautiful ring grain. Of course, these wouldn't be twin sides if only the bowl possessed this grain, so the shank, too, showcases dense, concentric undulations of growth rings, something made all the more impressive by the steep, parabolic undercuve of the stummel, letting one know just how exceptional this piece of burl is. 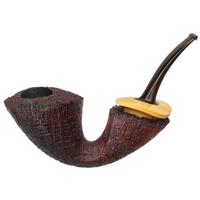 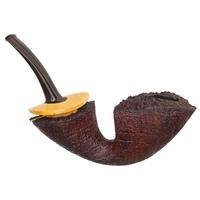 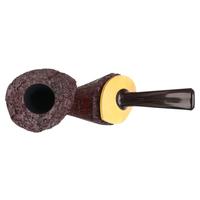 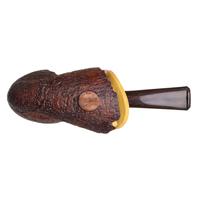 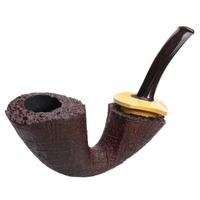