Through the tireless study of a great many shaping styles and the examination of as many pipes as he could get his hands on, Max Rimensi of Il Duca pipes has arrived at a singular design outlook that fuses specific aspects of nearly every school with his own unique sensibilities for a portfolio that's as diverse as it is impressive. The bent Egg is a consistently produced shape from Rimensi, though iterations such as this are far more rare. Reminiscent immediately of the Elephant's Foot, a shape originally conceived by Bo Nordh, this piece bears some striking similarities between its namesake and the modern classic. The shank here is remarkably trim and has been extended by three knuckles of dark bamboo, not only increasing its reach, but introducing a lovely bit of organic detail to appreciate. This added detail balances out the visual weight of the bowl quite well, drawing the eye toward the transition through the shape alone without adding a great deal of contrast to the color palette, keeping the look of this piece cohesive overall. The stem takes on a demure curve for an elegant posture and, on the left flank, continues a natural divot in the bamboo thanks to Rimensi's expert carving.

The shaping of the bowl is both where this pipe most resembles Nordh's design and where it diverges from those standards, as its been compressed at the fore and aft and expanded out a bit at the flanks, creating expansive fore and aft sections, though there are no ridgelines which separate the two. From a profile view, this pipe is certainly a bent Egg, though its Shield-like fore makes is quite the uniquely stylized one, showcasing Rimensi's talent quite well and providing a beautiful canvas for the finish. Dressed in a crisp, vibrant;y contrast-stained sandblast, the stummel of this pipe showcases rippling growth rings that surround basins of birdseye on either face of the bowl, the fore of the bowl stained a ruddy tan, while the aft's black stain sees dark ripples encroaching into its territory. 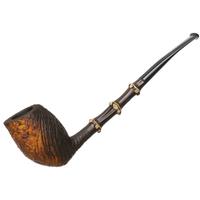 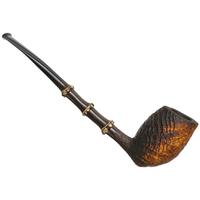 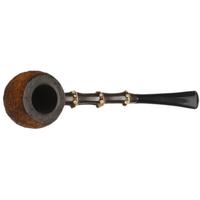 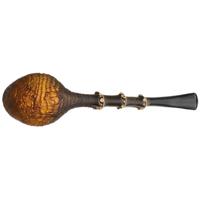 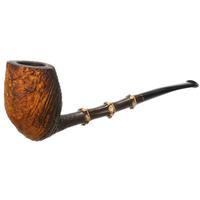