Eltang pipes that display an exceptional combination of grain and shaping receive the Danish carver's heralded "Snail" stamp, outranked only by those further distinguished by "M." Often times, Snail-grade pipes will also exhibit evocative, more non-standard designs, like the Elephant's Foot or Oliphant, while others fit well into Eltang's classic Danish shaping style. This Standing Fish, however, falls within the more playful and whimsical side of his design spectrum, reminiscent of Tom's Arne Jacobsen Lamp and Snail shapes in regard to creativity and evocativeness if not exact form. It's always striking to see such eccentric pipes from Eltang, proving his broad stylistic range when compared to his sleek, minimalist interpretations of shape-chart standards.

The majority of the pipe's length is composed of a beautiful section of boxwood, diminishing through a taper as it pierces the lower section of the bowl and extends into a vulcanite cap. The cap curls downward, and it's bottom rests on the same plane as the bowl's two feet, allowing the pipe to sit sturdily upright, seemingly impossible because of its dramatic length. The bowl itself is briar and Egg-shaped but with the aforementioned feet separating at the heel and calling to mind a fish's splayed tail fin. In profile, the bowl exhibits a graceful sinuosity, curving in S-like fashion, like a fish curiously swimming toward the surface. As expected from a Snail-grade, the grain rivals the impressiveness of the shaping: Bands of cross grain sweep down both flanks of the bowl, delineating immaculate storms of birdseye fore and aft — all dressed in one of Tom's illustrious contrast stains. 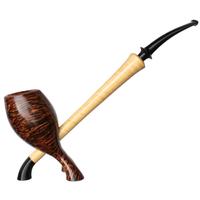 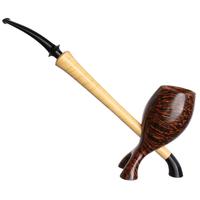 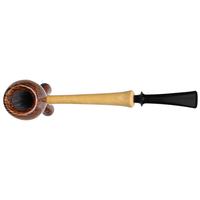 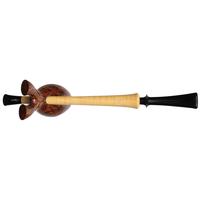 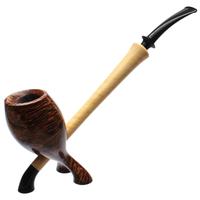 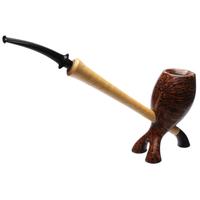