Tom Eltang has been carving pipes for decades, his work ranging from sleek, minimalist designs and Danish classics to positively intriguing pieces such as this Pierced Fish. We've only seen a few of these designs previously, making this one a most welcome addition.

Creatively organic, this Pierced Fish has been assigned Eltang's "Snail" grade, the carver's highest except for the rare "M" and which is given to pipes that feature especially remarkable grain and shaping. Shape-wise, this piece would be hard to interpret as anything but a pierced or speared fish. The flaring, Dublin-like bowl is towering, with an inflated rim softening the form. A gradual taper through the heel then broadens into the oval-shaped, flaring shank or "tail fin" with the continual curvature from bowl to shank face sweeping and sinuous. The "spear" of pale boxwood, too, flares at its end, with an expansion ring on the ebonite stem mirroring said flare.

The stummel wears one of the artisan's rich, auburn contrast stains, highlighting a brilliant display of birdseye fore and aft and along the underside, while handsome cross grain enriches both flanks and the rim. Despite the ingenuity and soft curves of this piece, Tom has still managed to ensure it's a comfortable fit in hand, with plenty of room atop the boxwood by the transition available for draping a thumb. 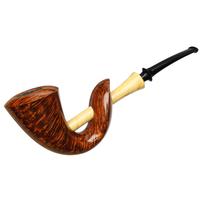 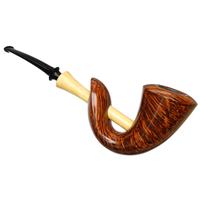 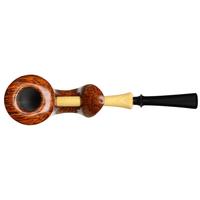 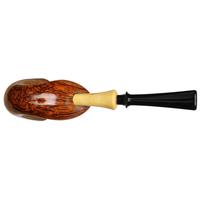 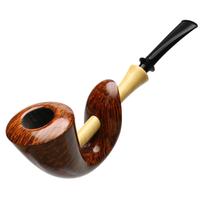 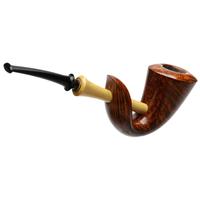