Tom Eltang's Snail grade designates pipes that display a superlative combination of form and grain. While all of Tom's pipes excel in composition and engineering, a briar block's grain patterns can be limiting: As a natural material, briar is often subject to naturally occurring imperfections and inconsistencies. An artisan carver can shape a particular pipe to best showcase the grain's potential, but that potential has limitations. As such, pipe makers are constantly searching for that perfect combination of natural luck and skilled craftsmanship — where natural beauty meets expert, man-made shaping — and Tom's Snail grade recognizes the most stunning examples of this marriage. Best of all, though, this particular offering is a boxed set of two Snail-grade pieces, both fashioned from the same block of briar as distinguished by the "Twins" stamp along the top of the box.

The straight Billiard is an iconic Danish rendition, with the bowl subtly rounded near the base and softly tapered toward the rim, while the streamlined shank and stem balance the bowl's proportions. A generous accent of black-and-white ebony wood extends the shank, and the ferrule expands ever-so-slightly toward the stem for added flourish in profile before transitioning into the stem's expansion disk and steady diminution. The bent Egg is likewise dynamic but with a stronger sense of fluidity thanks to the sinuous S-curve and forward-canted bowl. Supple and softly rotund, the bowl urges forward and acts in concert with the rim's orientation to create a slightly pointed lip at the fore in profile. The oval nature of the shank accentuates the bowl's implied momentum, and its upward arc meets a sleek saddle stem whose base is adorned with a mammoth bone accent of complex tones and visual patterns. Both pipes are housed in a refined hardwood box with a sliding lid, emblazoned with Tom's logo and suited to safe storage or tasteful display of shadow box style. 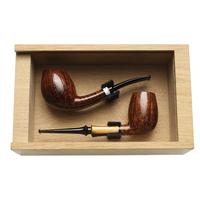 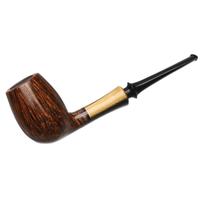 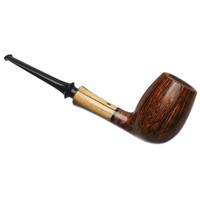 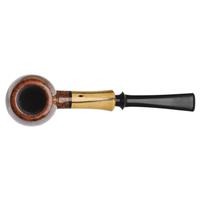 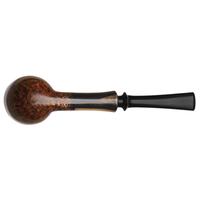 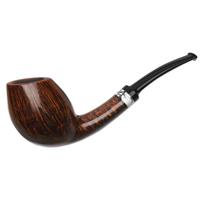 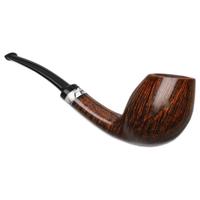 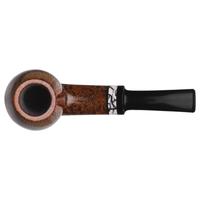 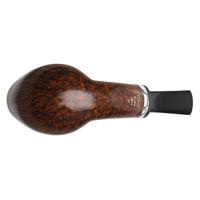 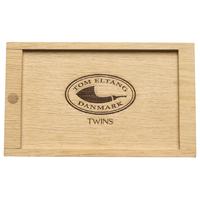 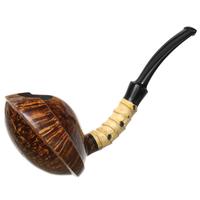