Compared to his signature Poker and Arne Jacobsen designs, the bent Billiard isn't an oft-seen shape from Tom Eltang. His bent pipes typically favor Egg or Dublin bowls, or hew toward Freehand designs like the Elephant's Foot. When the Danish artisan does render a bent Billiard, though, it generally aligns with classic Danish shaping cues: a more generously tapered bowl; soft, plump curves; a more defined transition; and a dynamically fluid sense of visual momentum. Tom's iterations of shape-chart standards exemplify his minimalist approach to pipe making; he's less concerned with wild flourishes and ostentatious extravagance, instead prioritizing proportional harmony, seamless lines, and refined simplicity — all aspects emblematic of this bent Billiard.

More so than Tom's past iterations, this particular bent Billiard blends vintage English shaping cues — à la Dunhill — with the classic Danish design tradition. Even though the bowl still tapers more noticeably toward the rim, many Danish renderings of the bent Billiard will lend the form a more dramatic forward cant. Here, though, Tom has poised the bowl more upright, effectively terminating the momentum initiated by the bent shank and stem for a more stark and stoic profile. Such a sturdy stance, however, is softened by the bowl's rounded base and slightly inflated rim — the latter a popular aesthetic choice among Danish pipe makers. Moreover, while Tom often elongates the transition of his bent Billiard interpretations, this one stretches more than others. The effect emphasizes and dramatizes the profile's S-curve, and the style calls to mind Dunhill's vintage "LC" bent Billiard, only here reinterpreted through Tom's Danish lens and with the stem less downturned than would be typical of the "LC."

As such, the shank and stem's sinuous curvature demand attention in profile, dividing the visual weight equally between it and the bowl for an exceptionally balanced composition, offering an equally balanced smoking posture. In fact, the saddle stem's downward turn testifies both to Tom's artistic eye and his reputable craftsmanship. If removed and with the base's protruding expansion disc placed at the stummel's heel, the mouthpiece's curve matches exactly with the upward curl of the shank. Such perfect compositional balance informs the overall piece's harmonious nature, leaving nothing out of place and ensuring that every line and curve is intentional and coherent in their relationship to one another. Furthering that intentional relationship and compositional harmony is the grain pattern: The striations of vertical grain follow the bowl's shaping and curve in tandem with the shank's trajectory, revealing Tom's choice of stretching the transition and curling it just so. Such a combination has earned this pipe Tom's prestigious Snail grade, and it's all dressed in a rich, walnut contrast stain, with an accent of brindled vulcanite complementing the color palette but adding visual diversity through its patterning. 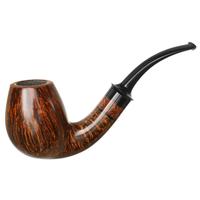 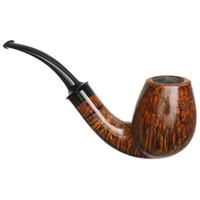 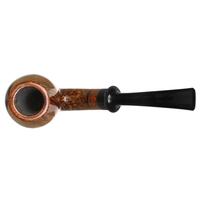 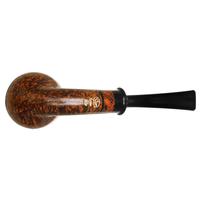 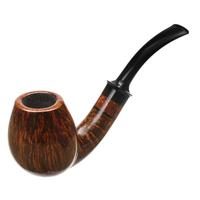 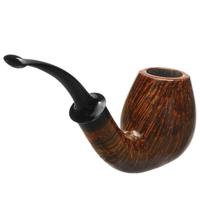