Tom Eltang is nothing short of a master artisan in the realm of pipe making, and his nearly five decades of experience speak to the immense talent he has developed over the course of his storied career. Whether he is crafting organic, naturalistically inclined pipes of a whimsical, highly stylized nature, pieces with roots in the Danish Functionalist movement, or even more traditional forms with origins in the shape charts of old Anglo-French marques, he makes them all with a firm grasp of their sense of line and a deft virtuosity that makes each pipe his own. This is especially true with regard to his signature shapes, such as this Eskimo, a profile that has become almost synonymous with Eltang's work.

Though it was inspired by Sixten Ivarsson's Ukulele shape and later tweaked by Ed Burak in his singular Bulldog profile, the Eskimo is a shape which Tom Eltang has refined across a great many iterations. As a shape, the Eskimo is one which is almost impossible to confuse with any other, presenting with a build that greatly emphasizes the shank's flatness and the bowl's comparative height. Though it may first seem as if the proportions here are slightly exaggerated in profile, the bowl and shank actually stand in harmony with one another in silhouette, looking almost like a low-slung Rhodesian. However, as soon at this pipe is seen from any other vantage, it's immediately apparent that it is not. The shank is incredibly broad, expanding to a degree that allows it to almost encapsulate the bowl, and tapers as it reaches toward the stem. Here that stem is a unique sort, almost a reverse saddle, as the step down is horizontal as opposed to vertical, allowing the horizontal taper of the shank to continue through the base, while the vertical taper is continuous throughout the combination.

The bowl here blooms out of the shank, rising from a neatly cheeked transition that meets a pair of ridgelines which run from the stem base through the shank. The bowl flares to a single, wrapping beadline from its base, and these ridges meet that flare at the flanks where they curve up slightly and dissipate, while the bowl's walls maintain their even rise without interruption. Said beadline works well with the ridges of the shank to add extra structure to this piece, while the bowl takes on a subtle forward cant that offers a dynamic look overall. Dressed in a tantalizing partial sandblast, the entire tapering rim here is left smooth, its broad build showcasing plentiful birdseye beneath a handsome contrast stain, while the black sandblast across the rest of the briar displays that birdseye texturally on the top and bottom. 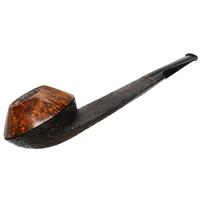 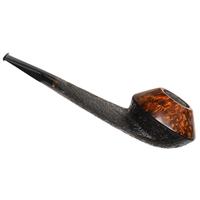 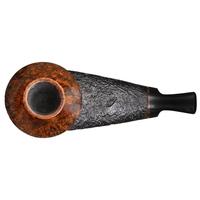 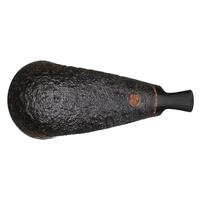 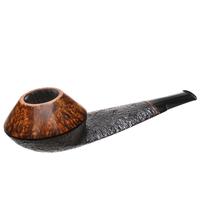 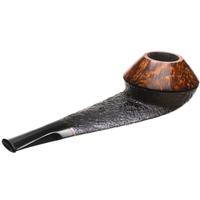